Not so sweet on Honey

Honeysuckle gets the star billing on the penultimate day of the Punchestown Festival, trading at just 8/13 to extend her unbeaten run to 12 in the Paddy Power Champion Hurdle at 17.25.

Honeysuckle has swept all before her this winter, with three Grade 1 triumphs. She was a narrow winner of the Hatton’s Grace in November, but then romped home in the Irish Champion Hurdle at Leopardstown and the real thing at Cheltenham.

Honeysuckle travels strongly, jumps fluently and finds plenty at the end of her races, and obviously she has yet to face a rival to best her. There’s no doubt that she should win, with a clear verdict over all of her main form rivals, but that doesn’t mean there isn’t a bet in the race. And that bet is Abacadabras, at 10/1.

Having put him up in an antepost column for the Champion Hurdle, only to see him fall at the third, it was frustrating, but encouraging, that Abacadabras was able to win the Aintree Hurdle in the style he did, just three weeks later.

Although that form of itself isn’t on a par with that which Honeysuckle showed at Cheltenham, he essentially cruised to the front
and did just enough once there.

A strong gallop will show him at his best

Part of the reason for selecting him at Cheltenham, despite a 10-length defeat by Honeysuckle in the Irish Champion, was that a strongly-run race would play much more to his strengths than the earlier race had. There is every chance that this race will also be well run.

Aspire Tower, fourth in the Champion, and Jason The Militant, who led in the Aintree Hurdle until unseating Rachael Blackmore after halfway, are both in the field, and as stable-companions of Honeysuckle they are likely to aid her cause by ensuring there’s no hanging about.

Also in the field and likely to press the leaders, if not go on himself, is Goshen. He is the joker in the pack, a horse of considerable ability, who, for one reason or another, hasn’t always shown it. His performance in the Champion Hurdle was a horror show, hanging so badly right that he was unsteerable at one stage. It’s possible he could stride on and look much more straightforward, returned to a right-handed track. But there are more obvious risks with him than Abacadabras, who is a similar sort of price.

Sharjah, runner-up in the last two runnings of the Champion Hurdle, is another who will be suited by a well-run race, though no match for the winner in either of those and much more likely to finish second or third than to win. Epatante is a more likely winner, as she wasn’t really herself in the Champion Hurdle and could come on a bit for that, certainly enough to turn around the placings.

Abacadabras is the recommended bet at 10/1 for the purposes of this column, although you might prefer each-way (three places, 1/5 the odds) or the 7/2 on the ‘without Honeysuckle’ market. 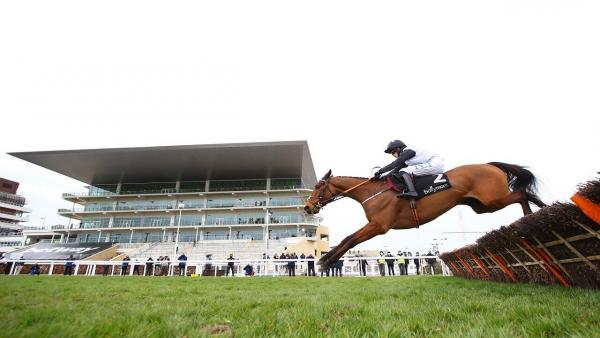 I made Bob Olinger a proposal of marriage when I saw him in the paddock at Cheltenham and his performance (pictured) was every bit the knock out that his physique promised. He’s just 8/15 for the day’s second Grade 1, the Champion Novice Hurdle at 18:00, but there’s no desire in this quarter to oppose him.

Bob Olinger faces a maximum of five opponents, the one with easily the best form being Gaillard du Mesnil, who was a socially-distanced second to him at Cheltenham. A race to enjoy.

As for a second bet on the afternoon, the Glencaraig Lady Chase at 16:50 looks one of the more fathomable handicaps of the week, and the novice Scarlet And Dove makes plenty of appeal. She has some smart form against her own sex and was probably just outclassed in a Grade 1 against geldings at Fairyhouse last time.

On the best of her form, Scarlet And Dove looks to have been given a very fair opening mark, with the added benefit of Jordan Gainford able to claim the 7lb allowance off her as well. The one slight doubt would be the ground, as nearly all her races have been on soft or heavy, but she’s worth chancing, despite that. She’s available at 5/1 with the Betfair Sportsbook.