Back with a bang

After last year’s enforced absence, the Punchestown Festival is back with a bang on Tuesday, with a card that mixes top quality – three Grade 1 events – with two fiercely competitive handicaps, two bumpers with mostly unraced runners and a race over the cross country course. The racing should be superb, but finding bets isn’t straightforward.

Perhaps the firmest opinion is the wrong horse is favourite in the day’s biggest race, the two-mile Champion Chase at 17:25. Here Willie Mullins sets a puzzle by fielding both Chacun Pour Soi and Allaho, who on their best form are head and shoulders above their rivals.

Chacun Pour Soi clearly has the best two-mile form this season, with his wins at Leopardstown outstanding. He had looked so good prior to Cheltenham and still looked the business early in the straight in the Champion Chase itself. However, his finishing effort really flattened out and he ended up only third.

Chacun Pour Soi traded at a low of 1.152/13 on the Betfair Exchange in running, which is a good guide to how well he travelled. Punchestown isn’t such a searching examination in the finish as Cheltenham, but Chacun Pour Soi faces an opponent who has form a good deal better than any of his rivals last time and one who will be ridden to expose any chinks in his armour.

Allaho‘s performance in the Ryanair Chase was the standout effort of the week at Cheltenham. With Rachael Blackmore in the saddle first time and fitted with a tongue strap, he forced a strong gallop, which was too much for nearly all his high-class rivals, and sustained it to the finish.

Allaho is dropping back to two miles for the first time over fences, but with the ride he is likely to get that shouldn’t be a concern. Although tipping at such a short price isn’t my usual modus operandi, Allaho at 2.962/1 makes plenty of appeal.

Willie Mullins also saddles the pair disputing favouritism in the Champion Novice Hurdle at 16.15. Longer term, Blue Lord is the better prospect than Echoes In Rain, but he comes here off the back of a fall at Cheltenham and whether he has the speed for what is likely to be a test of it in a small field with no guaranteed pace against a smart ex-Flat rival is to be doubted. 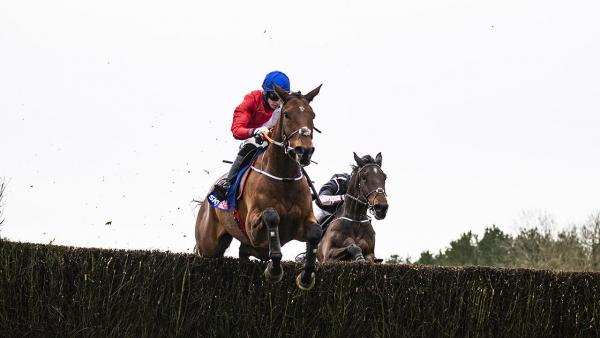 The third Grade 1, the Champion Novice Chase over an extended three miles at 18.30, offers a mouthwatering clash between Monkfish and Envoi Allen, with the inaugural Mares’ Chase winner from Cheltenham, Colreevy also in the line-up.

Monkfish has already won three times at this level this season, with his success at the Dublin Racing Festival the standout effort. He did all he had to do to land odds of 4/1-on at Cheltenham, though his jumping was adequate rather than sparkling. He’s made the running on his last two starts, though with stable-companion Colreevy in the field he might take a lead this time.

Envoi Allen lost his unbeaten record with his early exit at Cheltenham, Jack Kennedy, in the saddle for his four chases to date, now replaced by Rachael Blackmore. He’s going into uncharted territory so far as the trip goes, but there are elements in his pedigree that would encourage his staying three miles. If he does, Envoi Allen could well have a better turn of foot than Monkfish. Fascinating, but no bet.

Whiskey and Champagne the right combination

That leaves the handicap hurdles, specifically the valuable contest at 16.50. This is wide open, but a couple of speculative thoughts are Champagne Gold and Whiskey Sour. Both are available at 16-1 on the Betfair Sportsbook, which is a fair price each way, though they are likely to be at longer odds on the Exchange when that market forms.

The unexposed Champagne Gold was sent off at just 6/1 for the County Hurdle and travelled as if ahead of his mark for a long way, but he failed to pick up when asked turning for home. His previous second at Leopardstown would make him a leading contender and it may be best to forgive him his last run.

Whiskey Sour is a rather different matter. He hasn’t been seen in nearly two years, since his third in the 2019 Chester Cup on the Flat. He’s got a fine record in big fields both Flat and hurdling – he’s twice made the frame in the County Hurdle – and he’s fairly weighted on his best form. Although this is a rather longer break, his form after an absence is encouraging as well.

To the Moon now available network wide
15 mins ago