They’re back over the jumps at Punchestown on Saturday, and Betfair Ambassador Joseph O’Brien is expecting three good runs from his trio of performers.

Joseph says: “Banbridge made it second-time lucky in bumpers when winning at Killarney earlier this month. He ended up being quite impressive there and it stamped him as a useful hurdling prospect. His schooling over hurdles has been good and we’re hopeful that he’ll run a good race.”

Betfair ambassador Kevin Blake has looked through ITV’s races this Saturday and has tipped up two selections over at Haydock.

Kevin says: “The one that makes the most appeal at a big price is the Tim Easterby-trained Hyperfocus. The seven-year-old has an inconsistent overall profile, but when his record at Haydock is isolated, it reads three wins and a third from five starts in six-furlong handicaps. The most recent of those wins was a comfortable victory off a mark of 86 back in September and he has dropped back to a mark that is just 1lb higher.

“His record when fresh isn’t good, which makes it easy to forgive his recent below-form run on his seasonal return at York. Returning to Haydock could well be the key and he is one worth supporting win and place.”

A week before the Epsom Derby it’s a relatively low key Saturday for ITV Racing, but Tony Calvin still has four tips for you to consider at Haydock and Beverley.

Tony says: “Having his first start after a wind op at Musselburgh (not the first one he has had), Tarboosh shaped very well from off the pace to finish sixth, and the other aspect of that performance is how weak he was in the betting, going off at a Betfair SP of 28.027/1. It was a very much a performance that screamed a means to an end. 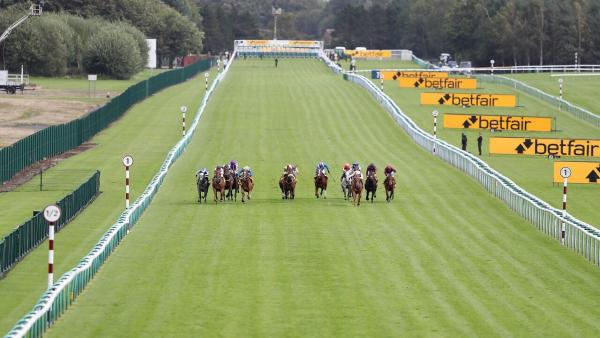 “Expected to be a lot sharper here, for a trainer who won this race with Final Venture in 2017, he will do for me. And Paul Midgley‘s horses are belatedly hitting some kind of form after a very quiet 2021 to date, with Van Gerwen winning at 8/1 at Ripon on Thursday night.

“One further aspect that seals the deal is there is a shedload of pace in here, which could play to his hold-up strengths – he will be coming late, if at all – on ground that he enjoys.”

Timeform pick out the three best bets at Haydock on Saturday including a progressive four-year-old in a competitive contest.

Timeform say: “Little to separate the majority of these on the figures, but the vote goes to With Thanks. She stays in training as a lightly-raced, but progressive four-year-old filly and she relished testing ground when winning a Group 3 at Naas on her final start last season. The way she forged clear that day suggests she should have even more to offer.”

Back With Thanks in the 15:30 at Haydock

Trainer Margaret Mullins has produced three winners from her six runners this month. She heads to Punchestown with one runner on Saturday.

Nathan Joyes says: “With just the one runner this Saturday, and with the form Mullins has been showing, there will be a lot of interest in Boy Called Sue, set to race in the 15:35 Maiden Hurdle.

“The four-year-old’s two runs to date aren’t exactly anything to shout about, finishing seventh of 11 in a National Flat at Clonmel in heavy conditions, before finishing a remote 11th of 16 at Cork back in March.

“But those two runs were for Boy Called Sue’s previous trainer, Ray Cody, as of this month. Mullins’ may not have had much time with her new stablemate, but there’s clearly some ability there which the average punter hasn’t noticed or seen, which Mullins may have.”

Boy Called Sue in the 15:35 at Punchestown

Timeform pick out the three best bets at Salisbury on Saturday starting with one that’s looking for a second win in a row.

Timeform say: “Colombe was well backed and showed much improved form to open her account on her return at Windsor earlier this month, travelling well throughout and showing a good turn of foot to settle matters a furlong from home. She was readily on top that day and is potentially very well treated back in a handicap from a mark of 70. Colombe is a strong fancy to follow up.”

Back Colombe in the 18:15 at Salisbury