Best bets for England v Denmark in one place

All seven meetings between England and Denmark at Wembley Stadium have finished 1-0, with England winning five to Denmark’s two, although the Danes beat the Three Lions there in the Nations League in the autumn.

Paul Higham says: “Southgate may well revert to a back three against the more dangerous Danes despite the success of the 4-2-3-1 against Ukraine, while the other big issue to decide upon is whether Jadon Sancho keeps his place ahead of the returning Bukayo Saka.

“The form of both of those in high-pressure knock-out games shows how good England’s squad is in forward areas, where there’s no obvious drop-off in quality when changes are made.

“The Ukraine game couldn’t have gone any better and, along with having 60,000 fans in at Wembley, the return of Mason Mount, the goals of Harry Kane, being able to rest key starters while still having a fresh Jack Grealish and Phil Foden to call upon if needed shows England really are in a superb position.”

“Yes, the draw has been kind, but the way they’ve managed games has shown great maturity, both in Southgate and his players, and there’s a collective belief in the plan and process that’s never been evident in previous ‘golden generation’ squads. They have everything in place to finally emulate the boys of ’66 and make a major tournament final.”

Dave says: “Harry Kane has gone all Paolo Rossi 82 in this event: a dud in the group stages before coming alive in the knockout phase.

“Rossi went from zero goals in the group to Golden Boot winner with six and Kane is halfway to that target after netting three times in his last two. Imagine Cristiano Ronaldo’s face if he got there (CR7 is currently top scorer alongside the Czech Republic’s Patrick Schick with five).

“It’s worth noting that Kane has scored two of his goals with headers – the second against Germany and the third against Ukraine.

“England have scored five headed goals in Euro 2020, two more than any other team, so it’s a big strength. In that case I’ll head to the Sportsbook and back Kane to score with a header at 9.517/2, a decent price given that it’s landed in the last two games.

“Historians will note that Alan Shearer nodded in England’s opener in the Euro 1996 semi at Wembley.

“Raheem Sterling‘s three goals in the tournament were all openers so that’s perhaps the best way to play him. Sterling to score first is 8.415/2 while he’s 3.711/4 anytime.”

>Wednesday Football Tips: Back a 12/1 cards double at Wembley

Paul says: “Neither of these sides have been particularly naughty so far in Euro 2020 with England and Denmark seeing just four bookings each, yet there’s some value to be had here.

“Most notably the OddsBoost on the sportsbook that jumps out is the 13.012/1 price quoted for Kalvin Phillips & Pierre-Emile Hojbjerg to both be booked. 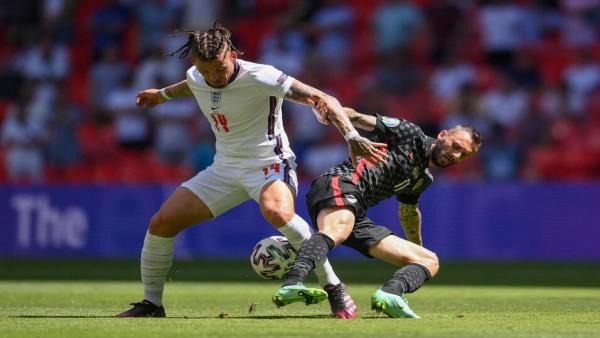 “Phillips was booked 10 times for Leeds in the Premier League last season, while Hojbjerg saw yellow nine times. Neither player is scared of putting the foot in.

“It looks a solid enough shout then, with two players set to be clashing in the midfield trenches in a huge semi-final and Dutch referee Danny Makkelie has already showing Phillips a card during the Germany game, but it gets better.

“Both Phillips and Hojbjerg were booked when Denmark beat England at Wembley in the Nations League last October, and there’s even more previous to go on.”

Alex Keble provides the tactical insight for England v Denmark and backs up his analysis with a bet.

Alex says: “There is one particular tactical issue that England can look to exploit, albeit it is a weak spot that manager Kasper Hjulman knows how to patch up. Their 3-4-3 can look too light on numbers in midfield when in its most expansive form, and indeed Czech Republic found joy here on Saturday once they evaded the first wave of the Denmark press.

“However, Hjulman is a flexible and reactive tactician who knows how to shut this space down: by switching to a 4-3-3 with Andreas Christensen moving to the base of midfield. Assuming they start in a 3-4-3, England will have early chances to dominate in this territory so long as they break quickly through Saka’s weaving dribbles.

“The most important player is Raheem Sterling, whose movement off the left wing gave England’s central midfielders a line-splitting pass against Germany following a difficult first ten minutes. His intelligent positional play could help England find gaps around Pierre-Emile Hojbjerg and Thomas Delaney, giving England the platform for a narrow win.”