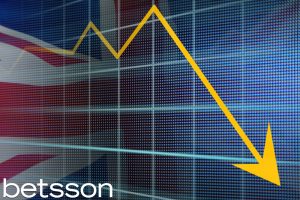 Online gambling operator Betsson announced Wednesday that it has decided to pull eight of its nine UK-facing brands as it looks to streamline its operations in that market and concentrate its efforts on growing in other, more lucrative regulated territories.

All eight online casino and sports betting operations stopped taking deposits and bets on Wednesday. The company said that customers of the eight brands would be contacted accordingly and all deposits would be repaid, while all outstanding bets would be paid out as winning bets.

The only Betsson-owned brand that will remain operational in the UK is Rizk. The company acquired the online casino earlier this year from Gaming Innovation Group along with three other brands in a €33 million deal. The operator said it would focus its UK efforts on growing that one brand.

Betsson explained that its single-brand strategy will help it increase efficiency and will have a positive impact on contribution from its UK business.

This is the latest of a series of moves over the past several years Betsson has made to reduce its UK business. In late 2018, the company even closed its UK office.

It said that its decision to further reduce its UK presence was prompted by the multiple regulatory changes that were introduced in the local gambling space in recent years as those required extensive investments in technology, regulatory compliance, and marketing. Betsson noted that such investments are not sustainable with its current UK setup.

Betsson Will Retain Other 8 Brands

Betsson operated as many as nine online gambling brands in the UK on three different platforms and under four licenses from the UK Gambling Commission. The company said that it handed back three of those four licenses to the regulator and that one of them was under review.

The company will retain the eight brands it has pulled from the UK and will look to grow them in other markets. Since the company will be using the eight operations in future, there will be no need for write-down of goodwill or trademark, it explained in a Wednesday statement on its official website.

The eight brands that are no longer active in the UK are Betsafe, flagship Betsson, Guts, Casino Euro, Racebets, Jackpot247, Live Roulette, and Kaboo.

Betsson said that its revenue from UK represented only a fraction of the company’s overall revenue at approximately 3%.

The company purchased several UK-facing brands in 2017 when it acquired NetPlay. However, the deal seems to have never produced the desired results and to have never increased significantly the online gambling group’s market share in the UK.

Rams vs Cardinals Odds, Lines and Spreads
11 mins ago