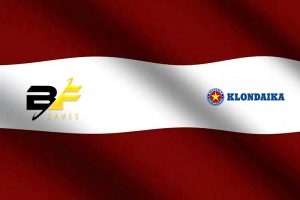 BF Games has entered yet another new market following a strong year that has seen the online casino games maker debut its products in several regulated jurisdictions.

The studio has entered the Latvian iGaming space after successfully integrating and taking its content live with locally licensed operator Klondaika.

Klondaika has been among the leaders in the provision of gambling services in Latvia since it was founded in 1993. The company runs land-based gambling halls in the Baltic country and has now been looking to grow its Latvia-facing online gaming brand.

Its digital product features more than 500 casino titles from a host of leading providers as well as live casino content and a sportsbook.

The content delivery deal with Klondaika marks the latest alliance signed by BF Games with a leading regional operator. The partnership has also secured the iGaming studio with access to another regulated market as it has significantly expanded its footprint over the past several months across several major territories.

Of their latest important partnership, BF Games Head of Business Development Claudia Melcaru said that this deal marks an important milestone for the studio as it was able to launch its content for the very first time in Latvia and offer local online casino enthusiasts exciting new experience that is “suitable for all player preferences.”

Krisjanis Kravis, Head of Klondaika’s online gaming arm, said that their digital brand has been going from strength to strength and that BF Games’ titles will help them enhance their offering.

Mr. Kravis went on that they are thrilled to be the first Latvian operator to be offering BF Games content and that they are certain the studio’s games will be a hit with Klondaika’s rapidly growing customer base.

As mentioned above, Latvia is the latest new regulated market BF Games has ventured into in recent months. Earlier in August, the iGaming studio announced that it has teamed up with French gambling group Betclic to enter the Portuguese market.

Betclic was among the first operators to enter Portugal after the country reorganized its iGaming space in 2016 and has built a strong presence there.

In April, BF Games debuted its content in another Baltic nation. Through an exclusive partnership with Uniclub Casino, the studio launched its products in the Lithuanian market for the very first time.

And in January, BF Games, ventured into the lucrative Romanian market after obtaining a license from the local regulator, the National Gambling Office (ONJN), and partnering with local operator MaxBet.ro.