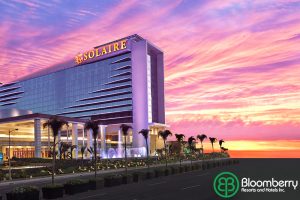 Philippine casino resort operator Bloomberry Resorts Corp. is moving full speed ahead with the planned expansion of its flagship Solaire brand in Quezon City, hoping to bank on the much-anticipated economic recovery from the Covid-19 pandemic in the coming few years.

The worst global health scare in many years has already eaten into Bloomberry’s profits, causing its Solaire Resort & Casino along Manila Bay to report billions in losses.

The property and other non-essential businesses were forced to close in March as part of the Philippine government’s efforts to fight the spread of the coronavirus. Solaire has not been conducting regular gaming activities since then.

As a result of the closure of its main operation, Bloomberry recorded net loss of PHP3.3 billion during the first six months of the year, down from a PHP4.7 billion profit during the same period last year. Revenue totaled PHP13 billion, down 55% from the first half of 2019.

Despite the massive impact on his company’s finances, Bloomberry CEO Enrique Razon Jr. said that they will proceed with plans to build a second Solaire-branded resort in the Philippines.

What would operate as Solaire North is currently taking shape on a 1.5 hectare site in the Vertis North complex in Quezon City.

When Will Solaire North Open?

The months-long lockdown in Metro Manila, the Philippines’ worst hit region since the start of the Covid-19 crisis, halted construction work on the future Solaire North casino resort at some point, but it resumed in mid-June.

Mr. Razon said during Bloomberry’s annual shareholder meeting that the opening of the resort had to be pushed back to the end of 2022 or early 2023 due to construction delays and that the “period of lockdown can be reasonably added to the completion date.”

In a stock exchange filing from earlier today, the businessman noted that they believe the launch of their new Solaire resort will “coincide with a meaningful upcycle that is typical after a period of economic weakness.” Mr. Razon added that he expects Bloomberry to emerge from this crisis “as a much stronger company.”

Solaire North will occupy a 40-story tower on a 1.5 hectare site in Quezon City. The resort will feature a casino, hotels, restaurants, bars, and multiple entertainment facilities. Bloomberry has said previously that its second Solaire property would look to capture mass market gamblers from Quezon City and the nearby Pampanga and Bulacan provinces.

Aside from Solaire Resort & Casino in Manila, Bloomberry also currently operates the Jeju Sun Hotel & Casino in South Korea. That property, as well, has been hard by the Covid-19 crisis.