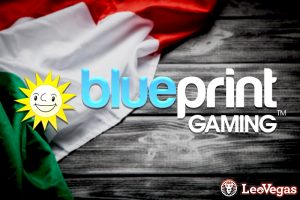 Casino games studio Blueprint Gaming is set to further cement its Italian footprint through a recent partnership with LeoVegas.

Under a supply deal with the major online gambling operator, the content maker has provided LeoVegas and its Italian players with access to a range of its top-performing slots.

Blueprint is certified by Italy’s gambling regulator, Agenzia delle dogane e dei Monopoli, to deliver its ever-growing library of casino-style games to locally licensed operators and is live with several leading companies in Italy. Its most recent agreement with LeoVegas, which too boasts strong presence in the local market, will further strengthen Blueprint’s footprint in the Italian iGaming space.

After successfully completing the integration phase, LeoVegas now offers a range of Blueprint-crafted casino games, including the studio’s most popular land-based games in the Italian retail sector such as Luck O’ The Irish which has performed particularly well at gaming establishments around Italy.

Blueprint’s partnership with LeoVegas in the Italian market once again demonstrates the game maker’s successful online cross-over of retail players through a range of its games. The company noted that LeoVegas’ Italian business now having access to these games would help it reach a wider audience in this important market.

The recent deal between Blueprint and LeoVegas expands the scope of the two companies’ existing relationship. The iGaming studio and the gambling operator first teamed up in 2017 and Blueprint has been supplying LeoVegas with a wide range of its slots in several regulated markets.

Commenting on their latest deal, Blueprint Director of Marketing and Relationships Jo Purvis said that the operator has “a great track record operating our games” and that they are delighted to be working with them in Italy.

Ms. Purvis went on to explain that their retail games have been transformed for online play to ensure that they appeal to an ever wider range of players and that they are looking forward to supplying these titles to LeoVegas and its players over the coming months.

LeoVegas Head of Casino James Ford added that it made “strategic sense” for them to enhance their Italian product offering with the addition of Blueprint’s hugely popular retail games which are highly regarded in the industry and in the local gambling space.

Mr. Ford further pointed out that their Italian player base will now be able to experience the likes of Luck O’ The Irish and LeoVegas Megaways both on their desktop and mobile devices for the first time and that they are sure these and the other Blueprint games now available will prove very popular with their Italian players.

Pochettino should be cautious before taking PSG job
1 hour ago