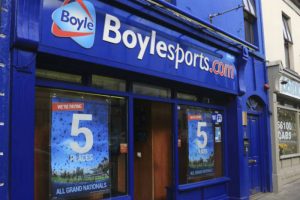 This is the latest purchase completed by BoyleSports in the past year as the operator looks to expand its presence outside the Republic of Ireland.

BoyleSports this week confirmed that it has bought six HughesBet betting shops in Dungannon, Coalisland, and Newry. The latest deal has brought the company’s Northern Irish estate to 45 retail betting facilities.

The acquisition of the six HughesBet betting shops has also further cemented BoyleSports as the largest retail betting shop owner on the island of Ireland with more than 300 facilities.

BoyleSports was founded in 1982 by Irish bookmaker John Boyle. The company is headquartered in Dundalk and currently employs more than 2,500 people.

The sports betting operator has been on a bit of a shopping spree over the past year as it has been looking to expand its portfolio of betting facilities outside its domestic market. BoyleSports has cited the Irish government’s decision to double betting duties as the reason for its new focus on expanding its retail betting estate in Great Britain and Northern Ireland.

Commenting on the acquisition of the six HughesBet shops, BoyleSports Chief Executive Conor Gray said that “since BoyleSports founder and chairman John Boyle opened his first shop at Markethill, Armagh in 1982, it has been our ambition to develop a meaningful retail presence in Northern Ireland.”

Mr. Gray added that the acquisition of the HughesBet chain “demonstrates our long-term commitment to the Northern Ireland market.”

As part of its Northern Ireland expansion effort, BoyleSports announced last month that it has become a kit sponsor of Larne Football Club in its first football sponsorship deal in the north.

The bookmaker now plans to rebrand the six new stores it has just acquired and renovate and upgrade them to “bring them up to the industry-leading standard which BoyleSports customers have come to expect and enjoy.”

The company confirmed the purchase of the HughesBet shops shortly after reports emerged that it was in advanced talks to further expand its UK presence.

BoyleSports first ventured into the UK retail betting market last summer when it acquired independent chain Wilf Gilbert’s 13 betting shops in the English Midlands and rebranded them. Earlier in 2020, the company also bought 33 William Hill betting shops in Northern Ireland and two in the Isle of Man in its largest acquisition deal so far.

The Irish bookmaker said previously that it planned to own around 100 regional UK betting shops, excluding the London area, by the end of the year and to largely concentrate on building a solid presence in the Midlands region.

BoyleSports has made Birmingham its main hub in Great Britain. It currently owns 19 betting shops across Birmingham, Coventry, and Stoke.

Rozner can find love in the hills
2 hours ago