You would think, with tennis shut down for five months mid-season and the season winding down for all but the final eight who qualified for the ATP Tour finals, the Sofia Open would have kept more of its original field.

But it didn’t happen. They began dropping like flies in the two weeks leading in.

And even after the draw came out, Laslo Djere (fatigue) and Pablo Andujar (hip) pulled out to add two lucky losers from the qualifying into the mix.

Here’s the list of players who had originally entered, only to take a pass.

Some had legit reasons. Schwartzman learned at the Paris Masters that he had qualified for the ATP Tour Finals. Fognini just got out of 21 days of quarantine after a positive COVID-19 test. Nishikori is still not healthy.

What does it all mean? A great opportunity for … someone. It’s a Next-Gen delight.

From February to September to November

The Sofia Open has always dealt with challenging time slots.

For the first four years, it took place in early February – immediately after the Australian Open. This year, it had moved to late September/early October, when the ATP Tour’s attention is on its Asian swing.

And when the French Open grabbed those dates to hold its event, Sofia was shuffled again – to the final week of the ATP Tour’s regular season when most players are looking ahead to the offseason.

Sofia will mark a number of firsts for the rising young Canadian duo of Denis Shapovalov, 21 and Félix Auger-Aliassime, 20.

It will be the first time they will be the top two seeds at an ATP Tour event – or any pro tournament.

The closest they’ve come was in Lyon last year, when Shapovalov was the No. 3 seed and Auger-Aliassime No. 4.

Shapovalov lost in the quarterfinals; Auger-Aliassime made the final. Benoit Paire beat them both.

Shapovalov was the No. 2 seed in Auckland in January, but lost in the quarterfinal. When he won his first (and so far only) ATP Tour title in Stockholm a year ago, he was the No. 4 seed.

DraftKings has the two co-favorites to win it along with 21-year-old Aussie Alex de Minaur.

De Minaur already has three ATP Tour titles and reached the final in Antwerp a few weeks ago.

Auger-Aliassime has reached three finals this season, all on indoor hard courts. But he’s still looking to take that next step.

Shapovalov has the tricky Adrian Mannarino as a potential quarterfinal opponent, and is in de Minaur’s half. 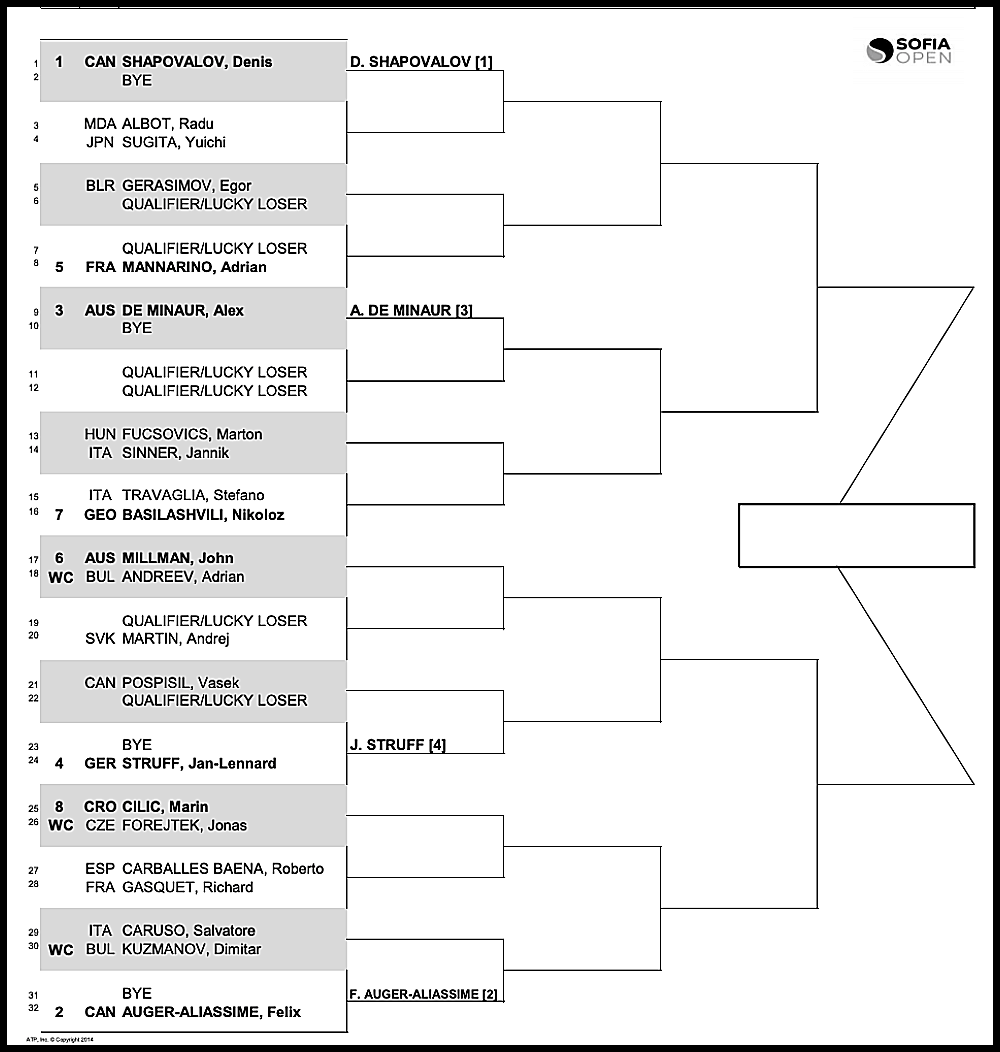 Auger-Aliassime could have Marin Cilic in the quarters; Cilic beat him in the first round in Paris this week.

And watch out for another Canadian, 30-year-old Vasek Pospisil.

Pospisil has the draw to make a run to the quarters. And he defeated Auger-Aliassime in the first round of Vienna two weeks ago.

Another youngster, 19-year-old Jannik Sinner, has a tough opener against the solid Marton Fucsovics, who beat him in straight sets at the Australian Open this year. At +133, the Hungarian is an interesting play.

Nikoloz Basilashvili, the former No. 16, has won just three matches this year. Since the return to play,  he not only has not won a match (0-for-8) – he hasn’t won a set. At this point, it appears he’s just showing up for the prize money. That’s probably why Travaglia is at -265 to win their first-round match.

Stephanie gets the straight dope from the tennis insiders. On court, she has represented her country internationally. A BA in journalism led to years on the MLB beat and a decade covering tennis globally. She’s written for Postmedia, the Guardian, the New York Times and also publishes OpenCourt.ca.

Stephanie gets the straight dope from the tennis insiders. On court, she has represented her country internationally. A BA in journalism led to years on the MLB beat and a decade covering tennis globally. She’s written for Postmedia, the Guardian, the New York Times and also publishes OpenCourt.ca.

How Can You Take Advantage of the Growing Sports Betting Market?
45 mins ago