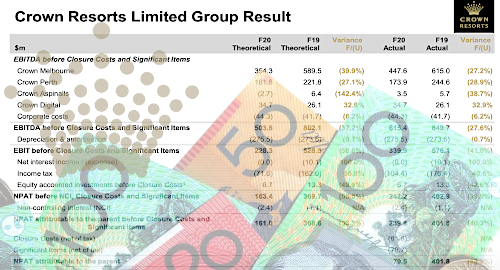 Australian casino operator Crown Resorts managed to eke out a small profit in its most recent fiscal year despite the COVID carnage in the year’s final quarter.

Aussie operators love to report ‘theoretical’ figures that assume a constant win rate in their volatile VIP gambling operations, while this year’s pretend numbers also eliminate costs associated with the impacts of COVID-19, which forced Crown to shut all its casinos in late-March (and Crown Melbourne remains shut to this day).

Anyway, the make-believe revenue would have been slightly lower (AU$2.1b), while fantasy earnings would have fallen only one-third to AU$504m and pretend profits would have plunged a mere 56.3% to AU$161m. Oh, and so long as we’re making stuff up, I’d be happily married to Jane Fonda circa 1965 or thereabouts.

Back in the real world, Crown’s VIP turnover fell by nearly half to AU$20.4b, but a higher than average win rate (2.11%) at Crown Melbourne allowed overall VIP revenue to dip a more modest 26% to AU$398.2m.

Over in the UK, the VIP-focused Crown Aspinalls reported revenue falling one-quarter to AU$42.7m while earnings fell 37% to AU$2.3m after closure costs. All UK casinos shut down a few days before their Aussie rivals and were only just allowed to reopen on August 15.

The Crown Digital division, which consists of the Betfair Australasia online betting exchange and the DGN Games social gaming unit, reported revenue up 4% to AU$135.5m while earnings rose nearly one-third to AU$34.7m.

Crown CEO Ken Barton called 2020 “an extremely challenging year” and the company still doesn’t know when its Melbourne property will be cleared to reopen. Crown did say that its Crown Sydney project “remains on schedule to open progressively from December 2020.”

This week, the ILGA focused on the 2016 arrests of 19 Crown-affiliated staff in China for soliciting VIPs to travel to Crown’s Australian casinos. Crown exec Barry Felstead confirmed to the ILGA that he’d been warned in 2015 by then-international marketing exec Michael Chen that Crown’s China-based staff were “living in constant fear of getting tapped on the shoulder” by Chinese authorities.

China forbids nearly all forms of gambling on the mainland and considers promotion of gambling to be as bad as the gambling itself. International resort operators are allowed to promote their non-gambling amenities but Crown was said to be keen to deal directly with high-rollers rather than pay commissions to junket operators.

Felstead told the ILGA that it was his opinion that the risks of operating in China “were being managed adequately.” Felstead said Chen assured him that Crown’s China-based staff were operating within the law, although Chen warned that “due process is inconsistently applied” in China.

The ILGA questioned Felstead regarding reports that Crown’s accounts payable department was instructed to code all China-bound transfers as “services consulting fees.” Felstead called these reports “unusual behavior” that was “not consistent with what we do.”

The bulk of the arrested Crown staff, including international VIP services chief Jason O’Connor, spent months in prison before being released. Shortly thereafter, Crown sold its stake in its Macau-facing joint venture and chose to focus solely on its Australian properties. The inquiry continues.