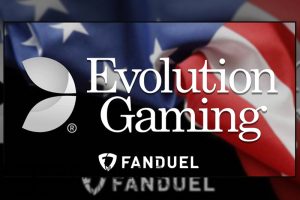 Live Casino specialist Evolution is set to further extend its US footprint through a recent content supply deal with online gambling operator FanDuel.

Through this new partnership, FanDuel will be able to enhance its existing Live Casino offering as it looks to cement itself as one of the leaders in the provision of both sports betting and online gaming services in the fast-growing US market.

As part of the deal, FanDuel will integrate Evolution’s entire Live Casino library, initially broadcast from the provider’s live studio in Pennsylvania. The operator will also be able to complement its existing Live Casino range in New Jersey with products from Evolution.

FanDuel has already been offering Live Casino games from Ezugi to its customers in the Garden State. It should be noted that Ezugi became part of the larger Evolution group in January 2019 when the two companies completed a $12-million tie-up.

Evolution’s partnership with FanDuel is the latest US-focused deal announced by the Live Casino expert as it looks to strengthen its foothold across the pond where a number of states have embraced legalized online casino products over the past several years.

A Key Driver for Market Growth

Commenting on their partnership with Evolution, Jesse Chemtob, GM of Casino at FanDuel, said that they are really excited to provide their loyal players with access to more live casino titles and that they see this type of offering as a “key driver for continued online casino market growth in the US.”

Johan Nordstrom, Chief Executive Officer Malta and Chief Commercial Officer at Evolution, said that they are delighted to be able to work with another brand owned by gambling giant Flutter Entertainment after their initial landmark deal with the operator’s Paddy Power and Betfair brands that Evolution announced last year.

Evolution’s partnership with FanDuel is the latest in a slew of US-focused deals signed by the Live Casino provider in recent weeks. Last month, the company announced an alliance Wynn Sports Interactive, the online gambling arm of Las Vegas casino powerhouse Wynn Resorts. Under the terms of that deal, Evolution agreed to provide the operator with access to its Live Casino range and related services.

Evolution is currently waiting for the UK Competition and Markets Authority to rule on its proposed acquisition of online slots specialist NetEnt. The company tabled a $2.2 billion offer to buy its fellow online gaming content provider in June.

The CMA is expected to announce its decision on whether the two suppliers can move forward with the transaction by November 16.

New markets for Playtech and Golden Matrix
47 mins ago