Depending on your take of football finances, reaching the Champions League final is either the climax of a magnificent journey under Pep Guardiola or the cold inevitably of being very, very rich.

Of course, the latter isn’t exclusive to Man City and, in many ways, they’re following in the footsteps of Chelsea whose ambitions were also taken to new levels with the injection of cash.

City will hope the comparisons end there given that the Londoners needed a heart-breaking final defeat against English opposition (losing on penalties to Manchester United in 2008) before eventually planting the flag (beating Bayern on penalties four years later).

After producing a magnificent run of victories to coast to a third Premier League title in four years, this would be a fantastic double to pull off. And if City had a storied history in the competition, you’d probably back them to do it.

But even though the manager knows what it takes to win this tournament, a first final at this level for any team has elements of trepidation. This is new territory and yet City are expected to triumph.

To reach the final, City racked up 16 points out of 18 in a weak group featuring Porto, Olympiakos and Marseille. The latter pair managed just three points each.

Notably, Pep’s men conceded just a single goal (home to Porto) in those six matches, a portent of how tightening up in defence would be the foundation of their success this season.

They then put away Borussia Moenchengladbach 4-0 on aggregate in the last 16 before surviving a wobble against another German side, Borussia Dortmund, in the quarters.

A 2-1 away victory to Paris St Germain showed that City were a team on a mission and they completed the job at the Etihad for a convincing 4-1 aggregate win.

After closing out their triumphant title campaign with a 5-0 win over Everton, the anticipation is rising that Saturday night will see them crowned as the best club team in Europe, something the bookies expected before a ball was kicked with City starting the tournament as joint 5.79/2 favourites with last season’s winner Bayern.

Jury still out on Tuchel

Thomas Tuchel has clearly done a lot right since taking over from Frank Lampard and turning Chelsea into something far less flaky.

Reaching the FA Cup final was a success, as was securing a top-four finish. But perhaps guiding the team to a Champions League final at the expense of Zinedine Zidane’s tournament specialists, Real Madrid, was the biggest achievement of all.

But when assessing Tuchel’s impact, this isn’t just a case of giving him A- and a pat on the back.

While those above achievements should be applauded, a harsher view is that, at the time of real crunch when prizes are on the table, Chelsea have failed the test.

They lost in the FA Cup final to Leicester and when needing to win to ensure a top-four Premier League finish, the Blues fluffed their lines on final day and lost 2-1 to Aston Villa. Had Leicester held on to beat Spurs, Chelsea would have been accused of bottling it.

So, as with Ole Gunnar Solskjaer at Manchester United, judgement of Tuchel’s season could still go either way and may even be decided by a single kick of the ball in a penalty shootout. More on that later.

Chelsea had a similar group stage to City’s. They won four and drew two in a group with Sevilla, Krasnodar and Rennes which produced a 14-13-5-1 points split.

They impressed to score a 3-0 aggregate win over new Spanish champions Atletico Madrid in the last 16, edged past Porto 2-1 in the quarters and did a professional job on Real Madrid in the semis, drawing 1-1 away and completing the task with a 2-0 win at Stamford Bridge.

I have a vested interest in Chelsea having put them at at 30.029/1 pre-tournament as a back-to-lay. If you took that price, I’d obviously advise laying some back to ensure a decent profit.

For balance, I also said City looked ‘false favourites’ but hey ho! My excuse was I didn’t realise the impact Ruben Dias would have and the preview was written shortly after City had been thrashed 5-2 at home by Leicester (before Dias was signed).

Despite Tuchel’s short time in charge, we already have some useful head-to-head form as the two teams have played twice since the German replaced Lampard. 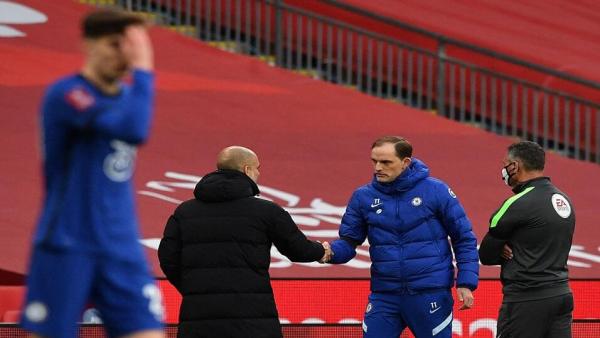 And, fascinatingly, Chelsea won them both. Hakim Ziyech’s goal proved the winner in April’s FA Cup semi-final at Wembley and earlier this month Ziyech (63) and Marcos Alonso (90) struck second-half goals to give the Blues a 2-1 win at the Etihad after Raheem Sterling had put City in front.

The twist is that Guardiola held his cards back in both games, as if he knew that there would be a third meeting in the Champions League final. The masterplan will be complete if City send out the full big guns and blow Chelsea away.

That said, beating their rivals twice will have given Chelsea some sort of psychological edge and it’s simplistic to thing City can just turn it on and change the outcome with a different line-up.

Even when personnel change, tactics can remain the same and Tuchel has clearly found a way of keeping City in check.

Both managers have plenty of fresh notes to peruse from those two recent games and regular meetings often lead to a cancelling out of each other and stalemate.

We’ve already seen a big final settled by penalties this week with David de Gea doing his best impression of Italia ’90 Peter Shilton and never looking like saving one despite having 10 come his way in Villarreal’s victory over Man Utd.

And it would come as no surprise if we see a second shootout in Porto on Saturday night.

Chelsea should have Edouard Mendy back in goal with the Senegalese stopper set to recover from a rib injury while N’Golo Kante’s likely return adds another layer of solidity in the bid to keep City at bay.

If I absolutely had to pick a winner, I’d side with City but I’m more than happy to back both to do it via spot-kicks in the Method of Victory market on the exchange.

Both sides have conceded just four goals in this season’s competition which offers supporting evidence that we have two good defences on show.

Also note that five of the last six finals played between teams from the same country have featured Under 2.5 goals after 90 minutes. That takes us back to the idea of familiarity and resultant stalemate.

As for Both teams to Score, that outcome didn’t land in the last two finals – Bayern 1-0 PSG and Liverpool 2-0 Spurs – although it was a winner in each of the previous eight which is a slight surprise.

For those keen to play the scorer markets, there are plenty of options.

Kevin De Bruyne and Riyad Mahrez were both on target in the quarters and semis. They’re both 13/5 on the Sportsbook to find the net, as is Phil Foden.

They’re all bigger prices and more appealing than the trio at the front of the City betting, 13/8 the departing Sergio Aguero, 15/8 Gabriel Jesus and 9/4 Raheem Sterling.

It’s hard to find the best Chelsea bet given that Jorginho was their top goalscorer in the Premier League with just seven (all penalties). Highly unlikely starter Olivier Giroud is their top marksman in the Champions League with six.

The 5/1 for Mason Mount has some appeal but the best bet would probably be a special on Timo Werner having an effort chalked off for offside! He’s 10/3 to score an actual goal that counts.

All the above names could be combined with a Draw in the Bet Builder and preference would be for Mahrez to score and a 90-minute draw at approximately 9.517/2.

Bookings? How about Fernandinho as he takes one for the team by dragging back a galloping Werner as Chelsea break.

He’s been shown nine yellow cards in his last 14 games which is quite a strike-rate.

In addition, referee Antonio Mateu can very easily be classed as ‘card happy’ as the Spanish official has flashed 55 yellows and two reds in his last nine matches.

It seems a fairly simple one to land so back Fernandinho to be booked at 13/8. If the Brazilian’s name is taken, that puts us in profit for the night.