Heaven Help Us to floor Porter

A bumper field of 15 is set to go to post for the Champion Stayers Hurdle at 17:25, the centrepiece of day three of the Punchestown Festival. Can Flooring Porter repeat the form he showed in winning the Stayers’ Hurdle at Cheltenham and confirm himself as the champion in his division this season?

It helps his cause that the pick of the British-trained staying hurdlers, Thyme Hill and Roksana, haven’t made the trip over. Agrapart, the sole raider, is very much one of the longshots.

Flooring Porter faces quite a few that he’s beaten previously and several who are uncertain stayers at three miles. If he is in the same form as last time, he is very much the one to beat, but he is priced accordingly.

Cracking race in which many have chances

Of those that tried and failed against Flooring Porter in the Stayers’, Beacon Edge didn’t see things out while looking a big threat. His earlier form makes him the closest to Flooring Porter in terms of what they have done this season, but his ability to see out a well-run three miles is in question.

The Storyteller was a place behind Beacon Edge at Cheltenham, running his usual honest race. He’s had a fine season, mixing hurdles and fences, and another good effort is on the cards, but he’s more an each-way option than a win one at the prices.

Flooring Porter isn’t the only Cheltenham Festival winner from this season in the line-up, the mares Heaven Help Us and Mrs Milner successful in the Coral Cup and Pertemps Final respectively. Heaven Help Us has achieved slightly more of the pair and if she stays then she would have place claims at least.

She wasn’t beaten by lack of stamina when she was well held over fences on her previous try at the trip, and though her pedigree isn’t entirely positive, with regard to the extra distance, she shapes as if three miles under these conditions will be within her compass. She gets the vote at 14.013/1.

Mrs Milner has no problem in terms of stamina, though she needs to improve more than most as she steps up in grade.

Last season’s Stayers’ Hurdle runner-up Ronald Pump is another potential threat to the favourite. He’s been seen just twice this season, most recently when giving Honeysuckle a race in the Hatton’s Grace. That was a muddling contest, but on the face of it, Ronald Pump ran as well as he ever has. The absence since is a bit of a worry though.

Heave can Help Us to a winner

Klassical Dream has been off even longer and has his stamina to prove to boot. However, his best novice form reads rather well and his pedigree certainly suggests he ought to stay well beyond two miles. Klassical Dream had a truncated campaign in the first half of the 2019/20 season, but if he can be excused those efforts then he has the ability to make an impact. 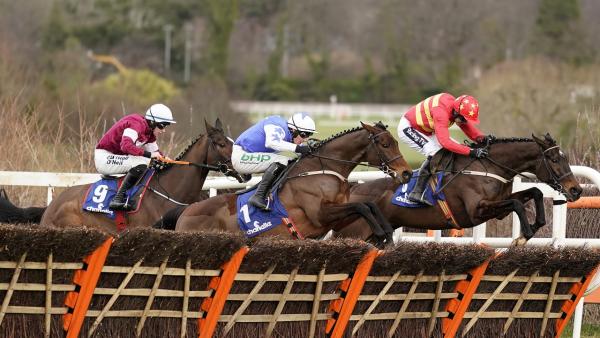 In summary, while Flooring Porter is the one to beat, he is priced accordingly. It is tempting to side with Klassical Dream but there are plenty of doubts about him. At a similar price, the bang-in-form Heaven Help Us, has fewer questions to answer and she rates the selection, available to back at 18.017/1.

Andalusa can cause handicap upset

Elsewhere on the card, Energumene, one of the season’s most exciting discoveries, should take all the beating in the Ryanair Novice Chase at 18:35, though after Monkfish and Envoi Allen were vanquished on the opening day of the Festival, nothing should be taken for granted.

Of the two big-field handicaps, the two-mile chase at looks slightly less impossible than the three-mile handicap hurdle, with the key form race the novice handicap over the trip at the Fairyhouse meeting earlier in the month.

The first five home from that event are set to line up, but it might be worth taking a chance on Andalusa, who managed only eighth. She travelled well for a long way, racing off the pace and didn’t have much room early in the straight, not given at all a hard race once her chance had gone.

Andalusa has had just two runs since the autum and there’s a fair chance that she can step up on what she did last time. Her best form suggests she’s on a fair mark. She’s available at 33/1 on the Betfair Sportsbook.