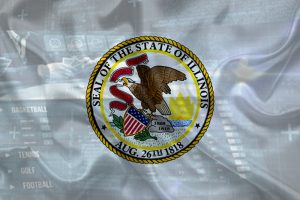 Illinois’ sports betting sector made a record-breaking handle in December at $491.7 million, which is 9% from November although many facilities remained closed through that time.

Since many casinos in the state had to remain closed for the month, the retail betting revenue came to just $97,915. The retail handle was just $182,701 but the biggest part of that came from bets placed before casinos were ordered to close in November.

Online revenue came to $23.8 million in December, showing a 40% drop from the prior month. Online players placed bets worth $487.3 million, up 12.4%, as players won much more of their online bets.

DraftKings’ revenue was followed by FanDuel with $7.1 million, forming a close three-way-race with Rush Street Interactive, which brought $6.8 million in revenue.

Online gaming and sports betting brought the highest revenue and it is no surprise given the closure of the state’s physical casinos. Even after opening, many of them had to operate at only half of their capacity.

These are the perfect conditions for the evolution of online betting, which brought $23.9 million in total revenue. FanDuel was also first in overall revenue at $7.1 million, while DraftKings trailed closely with $7 million, while RSI brought in $6.8 million.

The operators licensed in the state had to pay $3.8 million combined in taxes. The leading three operators together paid more than $1.1 million each. Of this total, $3.6 million was paid based on the state’s base 15% tax rate, while the remaining $242,656 came from an additional 2% tax on bets placed in Cook County, which includes Chicago.

Bets on final results, classed as “Tier 1” wagers, made up just over half of the state’s betting handle at $251.4 million and brought in $12.1 million in revenue. The remaining $240.3 million in handle and $11.8 million in revenue came from “Tier 2” bets, such as prop bets and point totals.

Meanwhile, professional sports bets made up most of the state’s handle at $321 million, translating to revenue of $15 million. Players staked $165.9 million on college sports, with casinos taking $8.6 million, while $26,507 was bet on motor sports, generating revenue of $6,404.

Parlay bets brought in more revenue than any single sport at $5.4 million, ahead of football’s $4.9 million. Football saw the highest handle, though, at $204.4 million.

As Illinois notices a decrease of profit, Pennsylvania announced another record-breaking revenue. The state is noticing higher revenue each month. If things are going like this, it will see the projected amount of almost $6 billion by the end of 2021.