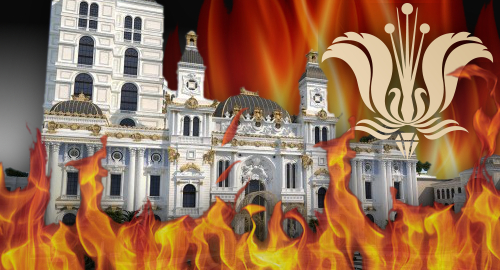 Saipan casino operator Imperial Pacific International (IPI) threw another $103m onto the bonfire in the first half of 2020, while questioning the definition of ‘exclusivity’ in order to get out of paying its license fees.

On Monday, IPI released its interim results for the first six months ending June 30, during which revenue fell 93.3% year-on-year to just HK$26.7m (US$3.4m). The company booked an operating loss of nearly HK$53m while its actual losses hit HK$798m (US$103m).

Believe it or not, that’s actually a significant improvement over the nearly US$240m the company lost in H1 2019, and the improvement came despite IPI being forced to close its Imperial Palace casino in mid-March due to COVID-19. Perhaps IPI should choose not to operate any gaming whatsoever in the second half of 2020 in the hopes that it might break even.

IPI’s once vaunted VIP gambling business booked a net loss of HK$24.7m in H2 versus a HK$255m gain the previous year. Mass table game and electronic gaming revenue each fell by two-thirds to HK$32.8m and HK$12.8m, respectively.

IPI’s ill-fated decision to avoid junket operators and deal directly with its VIPs continues to weigh down its results, as the company has proven woefully incapable of collecting on the credit markers it issues to its high rollers.

But there were far fewer VIPs this year, and the total outstanding debts that are less than six months old stood at a mere HK$14.9m, just one-quarter of where they stood this time last year. The overall outstanding uncollected amount remains astronomically high at over HK$9b, of which HK$7.15b is deemed to be permanently gone (up slightly from HK$7b last year).

The ‘contingent liabilities’ section of IPI’s report lists the numerous regulatory probes and lawsuits the company is currently facing. Incredibly, IPI says it still hasn’t submitted documents requested by the US Treasury Department’s Financial Crimes Enforcement Network (FinCEN), which is conducting a probe into “apparent violations of the [Bank Secrecy Act].”

IPI learned of FinCEN’s BSA probe back in March, and in May IPI was warned by the Commonwealth Casino Commission (CCC) that “you do not have the luxury to wait” to respond to FinCEN’s requests. But this is IPI, which occupies a sort of gaming industry Twilight Zone where the standard rules of gravity apparently don’t apply.

IPI-land is also where the company’s financial obligations are someone else’s problem. Like the annual license fee of $15.5m that IPI was supposed to pay on August 12, except the company unilaterally decided that the shutdown of its one and only casino meant that the CCC had nothing to regulate so they didn’t need the cash.

When the governor of the Commonwealth of the Northern Mariana Islands (CNMI) told IPI that argument wouldn’t fly, IPI opted for word games, accusing the CNMI of reneging on the terms of its license, which granted IPI the exclusive right to run a casino on Saipan. IPI based its argument on the fact that there are tiny arcades on the island offering electronic gaming.

In a letter to CNMI officials, IPI’s new CEO Donald Browne was in full pearl-clutching mode, bemoaning the “irreparable harm” suffered by IPI through the CNMI “allowing poker machines and e-gaming to operate outside of the casino.” Browne sniffed that “IPI did not expect the exclusive rights to casino gaming activity to be so easily breached.”

Browne proposed delaying the payment of the 2020 license fee until “the 15th year of the casino license agreement,” while also asking for the CCC management fee to be reduced by around two-thirds to $1m “as the cessation of gaming requires less oversight.”

On Thursday, the Marianas Variety quoted former CNMI Rep. Antonio Sablan, the author of the e-gaming legislation, who said the bill made a clear distinction between casino operations and the small gaming parlors that dot the island. Sablan noted that the e-gaming bill predated the casino license agreement, yet IPI made no demands for its repeal at the time.

Finally, the recent discovery that IPI owes the government $9.4m in unpaid taxes has the attorney general warning IPI’s many creditors that the CNMI is the big dog that gets to eat first. This spring, former IPI contractor Pacific Rim Land Development was awarded a $6.8m judgment for unpaid bills – one of many such suits pending – but the government has filed a tax lien that it says takes precedence over all other claims.

Mumbai to hit most sixes and win
2 hours ago