I had the right hump on Friday morning when my 20-1 ante-post selection Oakley wasn’t entered for the Greatwood Hurdle and I was put in a further punting dilemma for the race as what was going to be my substitute tip, Tegerek, tumbled in from an opening 12/1 in a place.

I nearly pulled the plug.

However, I went on record early on Friday afternoon – the Racing Only Bettor Podcast, to be precise – as saying that he should be favourite for the handicap after what he did at the course last time, so I am sticking to my guns and putting him up.

Sometimes you just have to go with the obvious.

The first thing to say about this handicap is that there isn’t a great deal of guaranteed pace in the field, and the opportunity is there for a jockey to take the bull by the horns.

Who knows, maybe we can see some old start-to-finish Martin Pipe tactics from Thinking, and the French recruit tries to make all, as he did when winning at Vichy back in August 2018?

But backing him entails a hell of a lot of guesswork, which is not the case with Tegerek.

Plenty anticipated his win here last month, as he was backed from early double-figures into 5/1 and he duly bolted up in a fast time, leaving One True King for dead after the last to win by 5½ lengths, with the third seven lengths away and subsequent Huntingdon handicap winner (off 132) Wild Max in fourth.

The runner-up franked the form when punted in the last here on Friday, and only lost out in a photo, and that strongly hints that the winner could still be very well treated.

Maybe the key to that big leap forward was the removal of the hood – it was certainly interesting they discarded it after a win and two seconds from three starts in it – and it is left off again, though 7lb claimer Kevin Brogan handily keeps the ride.

It could get very deep on Sunday if they get the forecast rain, but hopefully the selection will be fine on that score, having won on soft and finished second on heavy, and both his mum and dad won in testing ground.

All things considered, I do think he should be favourite, but I am keen to go in the race two-handed.

Countister is already 3lb lower than for her 2019 County Hurdle third just five starts ago, so the handicapper has given her every chance.

Dropping her 5lb in one hit after her Ascot reappearance is pretty risky (though admittedly she did show very little there, and may have gone) as she wouldn’t be the first JP McManus handicap plot out of left-field.

Edwardstone would be the one I fear most at the head of the market, as he is fairly treated and will handle any mud thrown at him, but I kept on coming back to Mr Dependable At Cheltenham, Ballyandy.

Back him 9/1 each-way, five places, with the Betfair Sportsbook. Again, his price has trimmed in from 14s on Friday afternoon but you can see why.

His record over hurdles at this track reads 1134328, and that eighth came in the Champion Hurdle in March, so I am forgiving him that one unplaced effort.

Those performances came in ground ranging from good to soft, and he also has three heavy-ground wins to his name elsewhere too, so the weather can get as filthy as it likes for him.

His ability to stay a lot further than 2m could also be a big plus too (he finished a close third in a Coral Cup over 2m5f in the soft here) if it does get very bad. 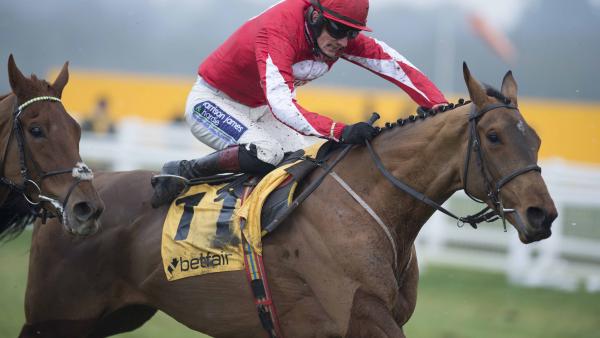 As a 9yo he does not have the scope for improvement of the younger brigade, but he arguably ran a career-best in the Welsh Champion Hurdle on his reappearance and the handicapper has left him on the same mark.

That could prove generous as the winner, Sceau Royal won the Elite Hurdle easily next time (not needing to improve admittedly), and that Ffos Las race was won in a very good time.

Everything points to him being the most reliable each-way bet in this race, and copping on the win part of the equation is no forlorn hope, too.

It is a good job that I fancied a couple in the Greatwood, as nothing else came remotely close to being a bet at the current prices in the other races.

So I am going to leave it there.

There is no point me going through all the other races, and repeatedly saying “no bet”.

Back Passion for Goodwood Glory
54 mins ago