It’s a shame that a bruised foot will prevent Cheltenham hero Minella Indo lining up for the Punchestown Gold Cup, the highlight of the second day of the Festival, but the race is still an intriguing contest, with five other top-class chasers set to line up.

The Cheltenham Gold Cup form is represented by the third (and previous dual winner of that race) Al Boum Photo. He was sent off a short price that day, but was beaten on merit and although he’s obviously got a leading chance, on form he looks too short again.

Kemboy was well down the field behind Al Boum Photo at Cheltenham, but that wasn’t a surprise, given his record at the track. On his previous start, he’d looked as good as ever in landing the Irish Gold Cup. Kemboy also won the most recent running of this race, in 2019, when he beat Al Boum Photo in convincing fashion.

At their very best, Al Boum Photo and Kemboy are hard to split, but, if anything, Kemboy has the better form and there is a good chance he will bounce right back away from Cheltenham.

As well as those two, Willie Mullins saddles another pair of runners. Easy Game, who has been outclassed at this level previously and has yet to prove he stays three miles, is hard to fancy, but there is more of a case to be made for Melon.

Like Kemboy, Melon failed to give his running at Cheltenham, in his case, unable to cope with the blistering gallop set by Allaho in the Ryanair. He’d also not been at his best behind Kemboy in the Irish Gold Cup. However, on his previous start, he was a close third, better than the result, behind A Plus Tard and Kemboy in the Savills Chase at Leopardstown. It would be hard to advise backing him, but the ability is there if Melon could recover his form. 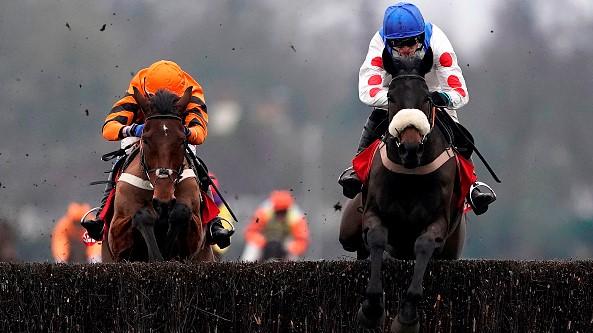 The non-Mullins trained contenders both won at Aintree. Cheekpieces first time revitalised Clan des Obeaux in the Bowl, while Fakir d’Oudaries was a convincing winner of the Melling Chase. Both enter calculations on their best form, though neither of those wins came in so strong a Grade 1 as this looks on paper. Fakir d’Oudaries needs to prove himself at three miles as well.

It’s a fascinating renewal of the Punchestown Gold Cup, which could go any one of five ways. At the prices, though, Kemboy, looks the bet at 5.04/1 in a race due off at 17.55.

There are two supporting Grade 1 events on the card. The Champion INH Flat race at 18.30 sees a rematch between Sir Gerhard and Kicruit, first and second in the Champion Bumper at Cheltenham. There isn’t a lot between the pair, particularly with Sir Gerhard having got first run on Kilcruit that day, and a change of personnel in the saddle, amateurs taking over from pros, makes this a tricky one to call.

In any case, there is a really interesting alternative to the two shorties in the shape of Eric Bloodaxe. He’s not been seen since running as if amiss at the 2020 Dublin Racing Festival, but he’d shown a high level of bumper form in winning his two previous races. If he’s ready to go, he is more than capable of getting competitive, worth chancing at 17.016/1 with the Betfair Sportsbook.

At 17.20, three Cheltenham Festival winners line up for the three-mile Daily Mirror Novice Hurdle, Vanillier, who won the Albert Bartlett, Galopin des Champs, the impressive Martin Pipe winner, and Telmesomethinggirl, who landed the Dawn Run. Narrow preference would be for Galopin des Champs, who showed a level of form in the Martin Pipe more than good enough to win a Grade 1 novice. However, he’s pressing for favouritism and the price isn’t tempting enough.