Nine stand their ground at the latest stage ahead of Saturday’s King George VI And Queen Elizabeth Stakes, at Ascot, a smallish but select field for the summer’s most notable middle-distance race. In truth, it is sometimes not quite as good a race as it should be, but this year promises a strong renewal with the 2020 Oaks winner Love against the 2021 Derby winner Adayar. The pair dominate the market, but perhaps more so than they should.

The price the main drawback with Love

Love is the current favourite. She is a smashing filly, a real trier, and a high-quality one, though this will be her first real test against male rivals. Love was imperious against her own sex last year and returned to defeat another filly Audarya in the Prince of Wales’s Stakes at Royal Ascot. Making her own running – perhaps not ideal – Love didn’t have to run to the best of her three-year-old form, but that will likely be needed, and more, against the weekend’s potential rivals.

One question about Love is whether she will be on her own, in representing Aidan O’Brien? In the past, four entries might have suggested four runners, but in both the Derby and the Eclipse – where Bolshoi Ballet and St Mark’s Basilica respectively went off short-priced favourites – O’Brien has relied on just the one runner.

The stable has three other entries on Saturday, but neither Japan, last of three in last year’s King George, nor Mogul look good enough, nor would seem to offer much in the way of acting as pacemakers. Broome might be another matter, so we’ll return to him.

Adayar not sure to benefit from Ascot’s short straight 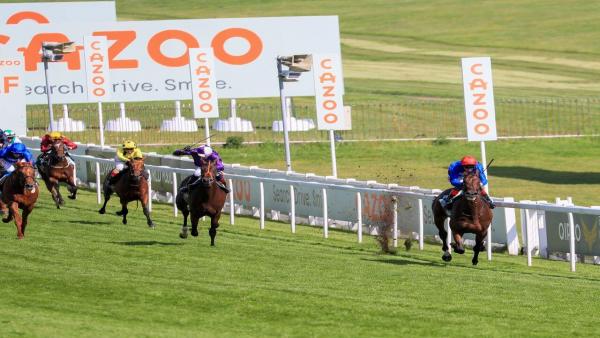 The Derby winner Adayar sprang something of a surprise on the day, though it was not so difficult to explain in hindsight, given how well he had shaped in the Classic Trial at Sandown on his return. Adayar failed to build on that in the Lingfield Derby Trial, but at Epsom he very much did.

The Derby form has largely been boosted subsequently, though the third Hurricane Run, who has won the Irish Derby and Grand Prix de Paris since, and Bolshoi Ballet, who won the Belmont Derby next time out, were seen to advantage on the day. There’s little doubt Adayar has the ability to get involved in the King George. Whether Ascot, with its relatively short straight and the possibility of quickish ground testing speed, will be an ideal fit for a horse that has looked very much as if stamina is his long suit.

Adayar isn’t the only three-year-old among the entries, with the Irish Derby runner-up Lone Eagle set to take his chance. He was a couple of places behind Adayar at Sandown, but then went on to win impressively at Goodwood, before being sent to the Curragh for the Irish Derby. Given a good ride by Dettori, Lone Eagle, looked to have the race in the bag over a furlong out, trading at 1.03 in running, but was worn down by Hurricane Lane close home.

Lone Eagle still finished seven lengths clear of the third and it may be that the Ascot configuration could play into his hands, kicking from the front off the bend and thereafter hard to peg back. One concern, though, would be that he can be keen early in his races, and the first three furlongs is downhill, increasing the risk of his getting lit up.

Although St Mark’s Basilica, who might well have started favourite, isn’t a runner, the pair he beat in the Eclipse are entered. Addeybb and Mishriff finished second and third in a field of four. Addeybb dictated in a race where there looked little obvious pace, but he was swept away by the winner in the closing stages. If he takes his chance, it will be the seven-year-old’s first run at a mile and a half, and it wouldn’t be sure to suit him.

Mishriff, on the other hand, has plenty going for him. He proved himself at the trip when winning the Sheema Classic in March and shaped in the Eclipse as if he would come on for the race.

There was only a neck between Addeybb and Mishriff at the line, but Mishriff had looked a much more potent threat to the winner two furlongs out. However, his early exuberance told on his first start in three months and Mishriff just tied up late on.

This column’s selection for the Eclipse, Wonderful Tonight, didn’t take her chance, despite conditions that ought to have suited her. Although there are thunderstorms forecast for Ascot on Friday, the ground there may well be firmer than suits her ideally. If there was a deluge and the going went softer than good, Wonderful Tonight would then be much more interesting.

Wonderful Tonight had won the Hardwicke Stakes on soft ground at Royal Ascot, better than ever in defeating Broome, who conceded her first run. The form has been boosted since – all four to run from the race winning next time out. Broome himself landed the Grand Prix de Saint Cloud, making all. If allowed to take his chance, he wouldn’t be a forlorn hope.

All in all, this looks a field worthy of one of the great races in the British Flat calendar. Love is the most likely winner, but looks short in a race that is much tighter on form than the market suggests.

News that he’s a likely runner may have taken a point off his price, but Mishriff appeals as the best bet at this stage for the King George, available at 6.05/1 with the Betfair Sportsbook.