We have to wait around 24 hours for the French Open draw, and it will be critical for the chances of many players in making the latter stages – with potentially big implications on the outright market as well.

Following his victory in the Rome Masters, Rafa Nadal goes into the tournament marginally odds-on, at 1.9720/21, and after lifting the trophy in Paris in early October – a different time of the year than the regular schedule – Nadal has now won 13 of the last 16 men’s French Open events. Last year here, in what were slower than usual conditions which arguably played even further into his hands, the King of Clay won 21 straight sets to win the title without dropping a set, although he only faced one top ten opponent – Novak Djokovic in the final.

Nadal has won two of the four clay warm-up events which he has competed in this year – we can forgive him his loss to Zverev in quicker conditions in Madrid – and given the past history and dominance last year, is justified as a heavy market favourite for the title.

The trouble is that in advance of the draw, we don’t know what half of the draw Nadal will be in. As the third seed, Nadal could be drawn in either Novak Djokovic‘s half or Daniil Medvedev‘s half, and should he be in Djokovic’s half, they would not be able to meet in the final. Nadal would much prefer to be in Medvedev’s section, with the Russian not keen to hide his distaste for clay – expect Nadal to shorten even further if he does get paired in the same half as Medvedev.

With an odds-on favourite, there’s probably the most scope to look at options from the other half of the draw, or quarter winner options. I’m happy to draw a line through a couple of players in terms of their chances – Medvedev at 90.089/1 for the reasons above, plus a poor clay record, and also, unfortunately for the purists, Roger Federer 110.0109/1, who has lost two of three matches since the 2020 Australian Open.

The large prices for two high-profile players may surprise some people, but they are big for good reason – based on current evidence, they don’t have much potential to reach the latter stages unless there is a surprise.

Djokovic and Tsitsipas next in the outright market

Djokovic, at 5.69/2, looks a reasonable second favourite despite not hugely impressing in the clay warm-up events, while Stefanos Tsitsipas 10.09/1 is definitely the third favourite having markedly improved his return data since the tour resumed last summer.

On that subject, the chart below illustrates the 12-month service and return points won on clay for the market leaders in the current outright market:- 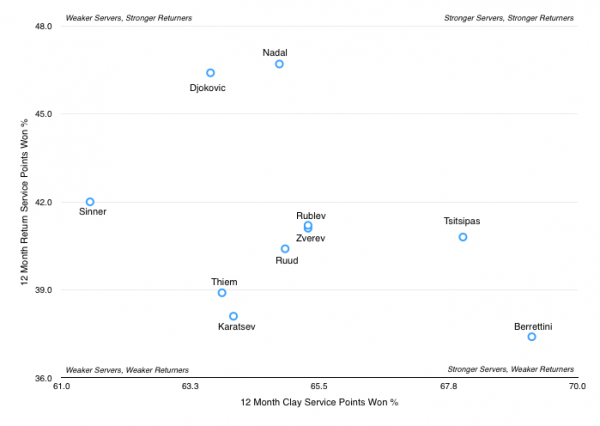 Nadal and Djokovic far ahead on return on clay courts

Here you can see that Nadal and Djokovic are streets ahead on return points won on clay in the lasr year, with Jannik Sinner leading the rest of the major contenders but with much weaker serve numbers than anyone else in the chart.

Conversely, Tsitsipas and Matteo Berrettini have the best serve numbers by some distance, and while he looks a weaker player than Tsitsipas based on these metrics, Berrettini is an interesting outsider at 100.0099/1 and could well be a value play in the quarter-winner market, depending on the draw.

Thiem potentially over-rated by the market

Based on the above, Dominic Thiem looks rather over-rated by the market at the current 16.015/1. The Austrian is traditionally strong on clay but has had a knee injury of late and has underwhelmed this year so far – including losing three of his last four matches and almost losing the other as well, coming back from a set down and in a second set tiebreak to beat Marton Fucsovics in Rome. At this point in time, it’s difficult to envisage a scenario where Thiem will represent much value in advance of the tournament.

I’ll be returning after tomorrow night’s draw, probably on Friday, to discuss the draw in some detail and finalise any outright selections – there are going to be plenty of talking points from that draw, which takes place at 17:00 UK time on Thursday.