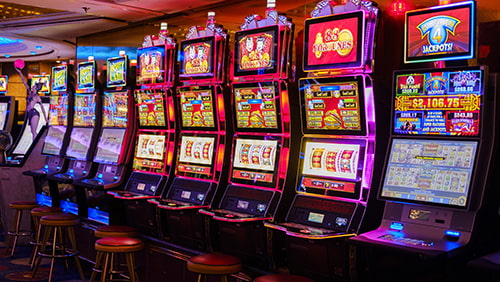 Online casino sights need to stay on top of the hottest slot offerings to keep up with the competition. We’ve got the newest slots released in the past week, so you can check them out and decide if you want them on your site.

The thrilling title is the result of the industry’s first Twitch streaming competition that Kalamba and Wildz Casino held earlier this year, with the winner invited to collaborate with the game studio to create a slot title. CasinoTest24 was the lucky streamer claiming first place and has played a major part in developing the game.

The game combines an Egyptian and a Wild West theme and is packed with features including Win Multipliers and Bonuses, as well as two unique Free Spins mechanics for each world.

The 5×3 slot also comes with Kalamba’s signature features HyperBonus that allows players to shortcut to bonus rounds, and HyperBet which enables players to customise the volatility profile of the game.

The new release is exclusively distributed on the ORYX Gaming platform.

iSoftBet, the leading online games supplier and content aggregator, has released Nordic epic Thunder Shields, the first slot to feature a three-tiered jackpot within a ‘Hold and Win’ game.

The high production, action-packed Thunder Shields is iSoftBet’s fourth game to contain its highly popular Hold and Win mechanic, taking it to a new level with Booster Shields in the feature, Colossal Respins, Thunderstorm Prizes and Mystery Spins.

During base gameplay, a Hammer symbol acts not only as a Wild, but also triggers the Colossal Respin modifier, where giant symbols appear, covering up to four reels and leading to huge wins. The Mystery spins feature sees at least three reels land as stacked mystery symbols, which all reveal the same symbol for impressive win potential.

To trigger the Hold and Win Bonus, six or more Cash Shields need to land on the reels, awarding three respins. Every time a new shield lands, the respin counter resets. Thunder Shields’ Booster’s come into play during this mode, with different colour shields revealing a different modifier. This can be multiplier increases, collector shields to bank all money already on the board and clear it for more opportunities to win, as well as a Reel Boost, Cash Boost or Respins Boost, all of which further add to the thrill of battle during the Bonus Round.

Thunder Shields is the latest addition to iSoftBet’s growing slot offering, which has seen numerous Megaways™ and Hold and Win titles added this year, with Thunder Shields following Shining King Megaways™ in the supplier’s portfolio.

Set in Ancient Egypt, an enthralling ancient civilisation, Scroll of Egypt offers players the allure of iconic Egyptian-themed graphics. With left to right and right to left wins, the game offers a return to player (RTP) rate of 95.5% for big bonuses and cash wins.

Scroll of Egypt includes a mixture of classic and modern slot features such as Wilds, expanding symbols, Free Spins and more. Its vibrant and visually impactful graphics coupled with the game’s innovative mechanics, will engage fans of slot games worldwide.

The prospects are high in Blueprint’s Hope Diamond

The mining adventure’s unique feature is the Diamond Trail located to the left of the reels, where any Diamond bonus symbol in view is added to the player’s stash and holds over for the duration of play. A full trail triggers Diamond Spins, during which players collect the cash value of the diamonds that land on the reels.

In addition, six Diamond bonus symbols activates the Diamonds Forever round where players are given three spins to secure dazzling prizes, while each new Diamond symbol in view resets the remaining spins to three.

Players make their way to Mount Olympus where Zeus, ruler of the gods, unleashes some huge features and jackpots

Game developer RubyPlay has today announced the launch of their new slot, Zeus Rush Fever. In the game, players’ make their way to the top of Mount Olympus where Zeus, the god of the sky, lightning and thunder, is ready to bestow great rewards. They can indulge in features that are fit for the gods, including free games, a jackpot pick round and 4 spectacular jackpots.

Zeus Rush Fever is a 5-reel slot that offers an impressive 243 ways to win. Win with 3 or more Zodiac wheels to trigger the free games feature. To add to the thrills, when a Diamond symbol lands, it can activate the Jackpot Pick with superb prizes up for grabs. To round off your winning spree, when 6 or more Rush Fever icons appear, brace yourself for one of the godly jackpots.

Designed for players dreaming of a white Christmas, the 3×3 slot showcases warming festive visuals and sound effects as well as the supplier’s cutting-edge Jackpot Race tool, fusing the logic of a poker-style pot with a must-drop jackpot solution.

Wins on the center line trigger the Nudge Feature, with the reels continuing to Nudge until there are no winning combinations left on the screen. For those who unlock three lines, however, the multiplier increases with each Nudge, and deserving gamblers can treat themselves to a Christmas gift with Habanero’s Enable Buy Feature allowing feature purchases with every spin.

The studio’s festive game launch caps a year in which it has significantly expanded its customer base in regulated markets across the globe, signing tier one commercial deals with the likes of Rush Street, MarathonBet, Codere and Loewen Play.

Brrrr, there’s quite a chill in Greentube’s Home of Games, and it’s because of the addition of our festive new online casino game, Santa’s Riches™! Bringing a touch of seasonal spirit to our portfolio, this Christmas cracker is now available for all B2B partners.

Inside the winter wonderland, 5 reels, 20 win lines and an Arrow Trail that expands the reels to 6 await players who’ve been good this year, creating a magical slot experience that is sure to spread holiday cheer.

A Free Spins Bonus can also be found inside Santa’s sack of goodies, offering four different types of presents each containing a game-enhancing prize. Add to this the tumbling reel mechanic and wonderfully festive animations, and you have the best slot gift gamers could wish for!

Santa’s Riches™ will have players jumping for Christmas joy!

Chiefs Given -186 Odds to Win Super Bowl 55, Buccaneers Listed at +156 After Conference Championships
19 mins ago

Best bets from Turf Paradise on Monday
1 hour ago