Cam can show his running skills in the Big Apple

Life after Tom Brady has not been pretty in New England, at the midway point they sit 2-5 and are on track for their first losing season since 2000 but in the form of the New York Jets they face a team that head coach Bill Belichick has rarely struggled against. Belichick, who famously held the position of Jets head coach for just one day in early 2000, holds a 32-12 record against New York and will be hoping his new quarterback, Cam Newton, can improve on his early season performances.

Newton missed a Week 4 loss to the Kansas City Chiefs after contracting coronavirus and has not thrown a touchdown since his return, although he has continued to be a potent threat in the rushing game. Despite only playing in six games so far this season Newton is fifth in the NFL in rushing touchdowns and has proven to be almost unstoppable when it comes down to short yardage situations. This is nothing new, the former Carolina Panther has been doing this for his entire career and his playing style has set records. Newton’s 64 career rushing touchdowns are the most by any quarterback in NFL history, only Michael Vick has more rushing yards than the 2011 1st Overall pick and the New York Jets have seemed to struggle against the two mobile quarterbacks they have played this season.

Josh Allen and Kyler Murray have both had success running against the New York defence this season and I’d expect New England’s QB to follow suit. With Belichick keen to get his team off to a strong start I’d expect a heavy dose of Newton running early in the game, SuperCam is 5/1 to score the first touchdown of the game.

Veteran Gore looking to roll back the years

The Jets’ 37-year-old running back Frank Gore is adding to his case for induction into the Hall of Fame as he winds down his career in New York. Drafted in 2005, Gore is one of only four players to have over 15,000 rushing yards and has scored 97 touchdowns in a career that is only really missing a more consistent playoff presence. He certainly won’t be reaching the playoffs this season but he has arguably been the bright spark for the Jets so far. 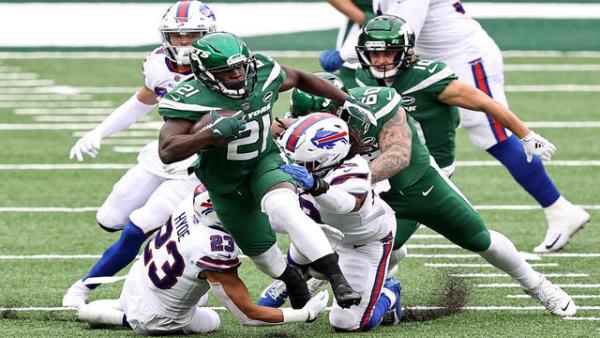 He no longer has the speed to break off long touchdown runs, but Gore is an intelligent rusher who will challenge anybody in short yardage situations. The Patriots have been poor against the run recently, after allowing only one rushing touchdown in their first five games they have allowed seven TDs in their last two and I’d expect the Jets to try and take advantage of this newly developed weakness.

The Jets have had to rely on the run more and more as the season has gone on, Jamison Crowder leads the Jets in receiving yards by 173 yards despite only playing four of New York’s eight games, so the passing game certainly isn’t working. With Crowder due to return from injury for tonight’s game he could draw some focus and look for Gore to pick up the 98th touchdown of his career as a result.

Winless Jets could keep it close

The New York Jets have been terrible this season, losing all eight games but in the last few weeks they have shown some, very small, signs of improvement on defence in particular two weeks ago when they held the Buffalo Bills without a touchdown. With New England inconsistent in the passing game I would expect New York to load up against the run and try to contain Newton and rookie running back Damien Harris as best they can.

Defensive end Quinnen Williams is showing himself to be a somewhat disruptive force against the run which may help, but with quarterback Sam Darnold questionable for tonight’s game it will fall to Joe Flacco to run the Jets offence. Flacco has had success against the Patriots in the past but that was mainly in playoffs games the Baltimore Ravens. The Jets will be buoyed by the return of Jamison Crowder at wide receiver giving Flacco a safety net that he can rely on whenever he is under pressure.

While it is difficult to see past a New England victory, particularly given their hapless start to the season, but with the Jets having a couple of positives to look at and the Patriots patchy on offence, New England to win by 1-13 points at 7/5 is not a bad bet.