There is plenty of decent action away from the ITV cameras this week but I am going to stick to my terrestrial TV brief, mainly due to the fact that these races are priced up relatively early, so the markets should be pretty well formed and firmed up.

Tipping into markets where only a couple of firms have gone up leads to a lot of changes, very quickly, and I would rather have a relatively static, realistic, price to go at.

That said, the scourge of Friday afternoon moves on the Exchange always looms large, and I often ditch tips at the last minute.

That bit of housekeeping over, let’s start with the Grade 1 Betfair Ascot Chase at 15:35.

We have lost half of the five-day entries at the overnight stage, which is a touch disappointing on both the betting and competition front, but the big two have stood firm.

The front-running Master Tommytucker’s chances have increased due to the smaller field (though three of his four rivals could also try to go forward, as well), while his trainer has thrown in a curveball by putting cheek pieces on stablemate Cyrname.

If that was flagged anywhere in advance of Thursday’s decs, then I missed it, but he seems he was getting a bit lazy at home and they perked him up when he worked in them on Tuesday.

If you believe the official ratings then Cyrname has 13lb and more in hand of this field, but I can’t get excited by him at around 4/5 on the Exchange, or anything else in the race in truth. 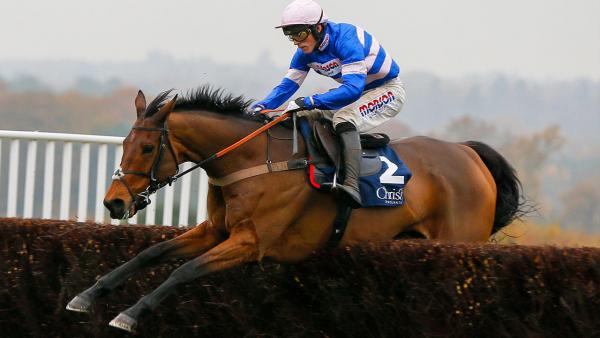 Boring and worthless sentence alert, but it wouldn’t surprise me if Cyrname won on the bridle, Master Tommytucker made all, the improving handicappers and recent course 1-2 Dashel Drasher and Bennys King stepped up to the plate (their speed figures suggest they are no forlorn hopes in this grade) or if last year’s winner Riders On the Storm was produced late after sitting off a lively pace.

Back to Demachine to thrive in field of six

I can also see Demachine benefitting from waiting tactics – there should a decent pace on here with three that like to go up top – in the Grade 2 Reynoldstown at 13:50 and he will be my first bet of the weekend at 6.611/2 or bigger.

I would have put him up at 20/1 ante-post on Tuesday but for the fact that he also had an engagement in a handicap at Newbury on Sunday, but I am happy to swallow my disappointment and side with him at a third of the price given the way this race has rather fallen apart since.

The top three in the ante-post betting – The Big Breakaway, If The Cap Fits and Alnadam – have not rocked up and 12 has become six, which is why Demachine appeals a fair bit at 6/1. Or anything bigger than 5s.

The official ratings tell you he needs to improve and the ground may not be ideal if they get even more rain – he was withdrawn from a Wetherby race on account of the heavy ground, so he could be taken out, I guess – but I am very much inclined to stick him up at this stage of proceedings.

I suppose he has another question to answer in that he has had a wind op since we last saw him, but hopefully that is a positive if it brings about improvement.

He was very impressive when winning in the soft over course and distance in November, running a decent time figure in the process, and I would be inclined to rate that as strong handicap form.

You could say his Newbury third was a little disappointing last time but perhaps his wind was an issue there and, anyway, I think that could prove to be very solid form as well.

The winner ran a blinder when third in the Grade 1 Scilly Isles next time, and Severano, who re-opposes here and actually heads the market, was back in fourth. Kerry Lee’s horses have been going well of late, with another winner on Wednesday.

O’Brien can get a tune out of Musical Slave

Ante-post betting is all about swings and roundabouts and, as much as missing the 20s Demachine irks, I had a lucky escape in not putting up Kimberlite Candy at the same price on Tuesday for the near 3m-handicap chase on the card at 14:25.

In his absence, his owner JP McManus still has four in the race , including course specialist Regal Encore, who won this race in 2018, and all have very plausible claims.

I was going to leave this race alone as you can make a case for plenty but, price is everything as we know – backing what you fancy regardless of odds will see you do your money pronto – and I have been lured in by Musical Slave at 11.0 or bigger, to small stakes.

I was going to play him each way, four places (be aware that there will be a Rule 4 though when Notachance is taken out, as Haydock is his first preference) but the 10s became 8s on Friday morning, so I switched to win-only.

Now, you could (or, more likely will) know your fate very early on if he jumps as poorly as he did at Doncaster last time – amazingly, he still wasn’t out of it despite a series of errors when finally unseating Richard Johnson five out – but I suspect we will see him ridden differently there.

Johnson had him on the inside at Doncaster behind a wall of horses throughout, and I expect Tom O’Brien will give him a proper sight of his fences this time, even it means charting a wider course and forfeiting ground.

Barry Geraghty did just that at Uttoxeter last season when he finished second to Sam’s Adventure in heavy ground – the more I look at that race the more I think he would have won with a stronger ride from 2 out – and Musical Slave is handicapped to win off a mark of 137 if returning to that form.

Like I said, I am going win-only now on the Exchange.

Malaya gets the green light again

I have a lot of previous with Nicholls’ Malaya too, and I battled with myself about whether to put her up in what is a ridiculously competitive 16-runner handicap hurdle at 15:00.

In the end I decided to give her the green light win-only at 11.010/1 or bigger on the Exchange, despite the fact that there are extra places on offer for each-way punters.

The fact that she is going up in trip for the first time this season sealed the deal for me, as she doesn’t look to have the pace for 2m these days, even in ground this deep.

Hopefully, Harry Cobden will give her a patient ride in a race with a fair bit of pace in it – I counted six forward-goers – and she does have previous herself with this contest.

She was fourth in a very strong renewal of this race in 2019 – the first three home were Brio Conti, Honest Vic and Ballyandy, with the runner-up running off just 122 – and she only found the runaway winner Nordano too good last season.

She is back to the same mark as when winning the 2019 Imperial Cup, under today’s jockey Cobden, and I will take my chances.

As I am going win-only with her, I am happy to have a second string to my bow, although I must admit I nearly shoved my arrow back in my quiver and sulked when the Sportsbook’s 14/1 about Stolen Silver disappeared on Thursday evening.

He ran an absolute stinker when I put him up for the County in March and this will be the first time we have seen him over hurdles since.

He is 3lb lower than at Cheltenham and he comes here on the back of probably his best chase effort yet over an extended 2m4f at Bangor last time, a race that has worked out well. And I quite like the angle of switching back to the smaller obstacles. I certainly would if I were a horse.

That Bangor run went a long way to proving he should be effective over this trip over hurdles, and he certainly hinted that he would when a staying-on eighth, off a 5lb higher mark than this, in the Betfair Hurdle last season.

Deep ground is fine for Stolen Silver, as we saw in his defeat of Edwardstone in the Rossington Main at Haydock, and he is weighted to go well.

Cheltenham bet has questions to answer at Haydock

It is currently heavy at Wincanton with more rain to come (The BHA site reckons 14mm from Friday morning onwards until race-time), and it could be a case of the last ‘oss standing in the six-runner Kingwell Hurdle at 15:18, especially as five of the sextet have been ridden very prominently in recent starts.

Hopefully, not shades of that Sandown mares’ race on Thursday. None of the finishers would have passed a breathalyser test.

I am a big fan of Song For Someone (who won this race last season after it was transferred to Kempton), but not at 5/4 with the Sportsbook, thanks. Or even a touch bigger on the Exchange.

Esprit De Large was 16s in a couple of places on Thursday afternoon and I can see why that would have attracted some, as the wheels have come off over fences, and he has the raw talent to be very competitive back over hurdles.

His Henry VIII Chase defeat of Nube Negra last season tells us that and we know he is a proper mudlark, but tipping him would too much like forcing a bet here.

I have backed Lisnagar Oscar at 33/1 to retain his Stayers’ Hurdle crown so I am hoping to see more from him in the Rendlesham at Haydock at 14:05.

His Cheltenham win obviously makes him a great price at 8/1 but he has questions to answer here, and under his 6lb Grade 1 penalty too, on his first start since November.

He carried that 6lb burden first time up at Wetherby and ran pretty well I thought. And it transpired he knocked into himself and made a noise (has had his wind done since) at Newbury last time.

If he wins, then happy days on the ante-post front, but this looks a very trappy race to call.

The brace of progressive 7yos, Notachance and Enqarde, have obvious chances in the Grand National Trial at 14:40 but I went this way and that when trying to find the winner.

I could list why all nine have chances at their respective prices because you can make a case for them all on varying grounds, namely profile, course form, the heavy going, and falling handicap marks – etc etc – but it would still end with “no bet”.

So you are on your own at Haydock.

Best bets from Turf Paradise on Monday
8 mins ago