As highlighted in the preview, this has been a good event for outsiders, past champions, and veterans.

Paul Lawrie closed out the last century by winning at Carnoustie at a huge price and seven of the last 17 winners have been matched at a triple-figure price – including the last two winners here at Royal St George’s.

Darren Clarke was an unfancied 300.0299/1 chance in 2011 and very few people backed Ben Curtis in 2003 who was arguably one of the biggest surprise winners of all time.

Ernie Els, Tiger Woods and Padraig Harrington have all lifted the famous Claret Jug on multiple occasions in the last 20 years and this is the major in which the old timers can shine.

Shane Lowry was only 32 when he won at Royal Portrush two years ago (event cancelled last year) but Francesco Molinari became the ninth player aged 35 and above to win the Open in 12 years when he lifted the Jug in 2018 and we’ve seen a couple over 50s come close to winning it recently too.

At Royal Birkdale 13 years ago, 53-year-old two-time Open Champion, Greg Norman, who won the second of his two titles at Royal St George’s in 1993, led the field by two strokes after three tough, windy days and he was the oldest player to ever lead the Open Championship through 54-holes but only 12 months later, 59-year-old, Tom Watson, smashed that record when he took a one-stroke lead into round four at Turnberry.

Both men fell short but veterans can and do figure in this championship year after year and with the forecast now suggesting a constant breeze throughout the older players could come to the fore again, so I’ve picked out three former winners at a juicy price.

I’m quite surprised that we’re able to back the reigning USPGA Champion and 2013 Open winner at such an inflated price. Phil Mickelson took years to get to grips with links golf but he’s now one of the world’s best.

Lefty’s peerless victory at the USPGA Championship two months ago, when he became the oldest man to win a major, came at a links style course (Kiawah Island) and he could very easily have won three or even four Opens. 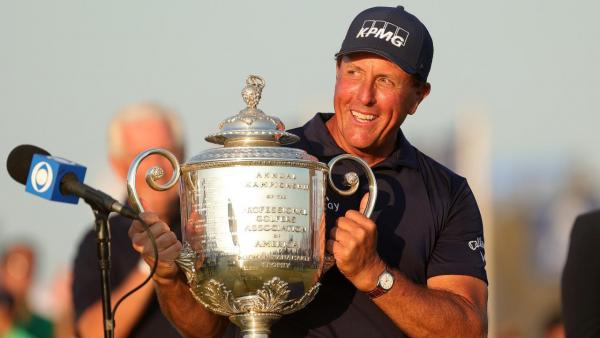 In addition to his glorious win at Muirfield eight years ago, he missed out on the playoff by a stroke in 2004, when huge outsider, Todd Hamilton, edged out Ernie Els at Troon, he was the only player to get anywhere near Henrik Stenson in 2016, finishing second and 11 shots clear of J.B Holmes in third, having been matched at a low of 1.684/6 in-running, and he was matched at just 2.01/1 after ten holes on Sunday when he also finished second here in 2011 before a poor back-nine put pay to his chances.

He’s repeatedly spoken about how hard he finds it to focus nowadays but he managed it nicely at Kiawah, with his brother Tim playing a key role on the bag and I fancy the pair can go well again here.

Is Cink Set to Contend Again?

Having beaten a physically and emotionally drained 59-year-old Tom Watson in a playoff at Turnberry in 2009, Stewart Cink must rank as one of the least popular winners of the great Championship but that’s a little unfortunate for such a congenial character.

Now 48 and very much at the veteran stage, Cink is definitely viewed as one of the good guys and with his son Reagan on the bag, he’s enjoying quite a renaissance, winning twice this year already on the PGA Tour.

Cink was a comfortable winner of the season’s first event – the Safeway Open in September – and he hacked-up by four strokes at the RBC Heritage around the Harbour Town Links in April.

He was tied for 20th in 2019 and in his two previous visits to Royal St George’s, Cink had finished 34th and 30th so he’s one of few in the field with course experience.

Pick Padraig to Keep on Grinding

In a little over two months, Padraig Harrington will captain the European Team at the Ryder Cup at Whistling Straits and there’s no denying that his attention has been largely fixed on the impending biannual battle this year but he’ll be fully focused on the task in hand this week.

The worsening weather forecast won’t inconvenience the 49-year-old Dubliner and a third Open Championship title can’t be ruled out.

Harrington showed he’s no back number when he finished fourth behind Mickelson in the USPGA Championship two months ago and he’s bound to be inspired by Lefty’s win Kiawah Island.

Padraig warmed up nicely for this week’s event with an 18th place in the Scottish Open and it would be no surprise to see him still grinding away on Sunday as the less experienced players fall by the wayside.