Popong to prove herself ahead of the handicapper

The final day of the Punchestown Festival features two Grade 1 contests, though it’s fair to say neither of them makes huge appeal as a betting contest.

So, in reverse formation, as they say on the railways, let’s look first at the Pat Taaffe Handicap Chase at 16:30 in which Popong looks on a potentially very generous mark. She’s at the head of the market, not surprisingly, but 13/2 still looks a generous enough price.

Popong has had just the five runs over fences. On her first three starts she ran to just a fairly useful level, winning the middle of those three starts, against her own sex at Listowel. But it is her next two runs that make her look ahead of her mark. At Punchestown in November, Popong finished second to Colreevy, giving that rival weight. The form has been franked time and again, which makes her mark of 130 look a generous one.

Next time out, making her handicap bow over fences, Popong was sent off at just 7/2 for a competitive-looking affair at the Leopardstown Christmas meeting. Having moved smoothly into contention before the second-last, she was shaken up turning for home, keeping on in a close fourth when she fell at the last, the winner behind her at the time. That form is pretty strong too, though the handicapper has left her on the same mark.

Popong, who will be ridden by Rachael Blackmore, hasn’t raced over an extended three miles before – her last run was at just 17 furlongs – but there is enough encouragement in her pedigree and the way she races to think she will stay

The Champion Four Year Old Hurdle at 16:00 is fascinating, featuring a rematch between the first three from the Triumph Hurdle.

Quilixios came out on top at Cheltenham and might well do so again. However, there are grounds for thinking Zanahiyr, who was a little flat and not in the form he’d shown previously, and Haut En Coulours, who was having just his second start over hurdles and first for Willie Mullins, could turn the tables.

Also in the field are the first two from the Fred Winter, Jeff Kidder and Saint Sam. On terms a stone better, Saint Sam probably ought to reverse placings, but Jeff Kidder has shown further improvement since, winning a Grade 2 at Fairyhouse, and he is clearly thriving at the moment.

With the three runners from the Triumph closely matched in the betting and taking out a large chunk of the market, the angle might well be to back Jeff Kidder each way, even though though he needs to progress again.

Burning Victory the value in battle of Mullins’ mares 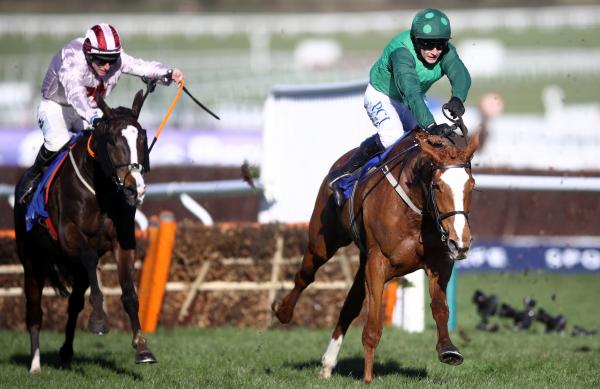 The Mares Champion Hurdle at 15:20 is predictably dominated by Willie Mullins. He fields the first three in the betting in Concertista (pictured), Stormy Ireland and Burning Victory.

Concertista has the best form and was slightly unfortunate not to win the Mares’ Hurdle at Cheltenham, while Stormy Ireland looked her old self when winning at Fairyhouse last time and could have the run of the race.

But it’s Burning Victory who catches the eye. While hasn’t been seen since her fortunate victory in the 2020 Triumph Hurdle, such an absence hasn’t been a problem for the yard this week; Klassical Dream off even longer before winning the Champion Stayers Hurdle.

Burning Victory looked more of a stayer than might have been anticipated from her pedigree in the Triumph and she is likely to be effective over an extra half a mile.

At the prices, Burning Victory is worth chancing at 9/2 to spring a minor surprise.