Preliminary Work at the Site of Caesars’ Danville Casino Has Begun 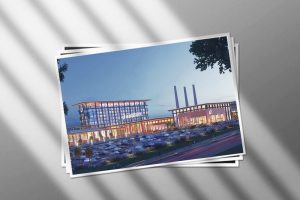 Site work has begun for Caesars’ casino in Danville, Virginia, local news outlets report. The property is set to open doors in 2023 and city officials say the Las Vegas gaming and hospitality giant is on track with the original timeline.

City leaders told local media that discussions are underway about the height of the building as well as how to incorporate the iconic smoke stacks at the site that will host the casino resort into the project.

Following the legalization of casino-style gambling in Virginia in the spring of 2020, Danville officials named Caesars as the preferred developer of the city’s gaming resort. The property is set to be built at the site of the former Dan River Mills industrial complex in Schoolfield. The last three remaining smoke stacks at the complex will be part of Caesars’ property.

Danville city leaders expect shoveling and graveling at the site to kick off later this year. City Councilman Lee Vogler said that “it’s a long process to do this,” but the developer is still on track and the resort is expected to commence operations in some time in 2023.

Mr. Vogler went on to say that locals will start to see “some dirt move around later in the year, but they [Caesars]

want to make sure they have everything lined up with the building.”

City officials hope that the construction of the casino complex will attract new businesses to the area and that they see Caesars’ arrival and the opportunities its property has the potential to create as “a positive boost for the community.”

Marnell is the architect behind the casino operator’s Caesars Palace convention expansion as well as behind iconic Vegas properties such as the Bellagio, Wynn Las Vegas, and Park MGM.

Caesars Virginia is expected to cost around $400 million to build. It will include a 300-room four-star hotel, a casino with 2,000 slot machines, 75 table games, 16 poker tables, and a sportsbook, a 2,500-seat live entertainment venue, a 35,000-square-foot conference center, a pool complex, and a spa.

A contractor to build the planned casino resort is expected to be selected in the second or third quarter of the year. Groundbreaking is scheduled for the fourth quarter.