Raheem Sterling remains the favourite to win the Player of Tournament award at Euro 2020 after his match-winning performances for England, but Harry Kane isn’t far behind following his fourth goal of the Euros last night, while Jorginho and Giorgio Chiellini are seeing market support.

Manchester City forward Sterling is 2.962/1 after his skill and energy was crucial to England beating Denmark to reach Sunday’s final against Italy.

Sterling played a vital role in both England’s goals in the 2-1 win, forcing Simon Kjaer into scoring an own goal in the first half and winning the penalty from which Harry Kane scored the rebound.

Goals in the final could seal it for Kane

Kane follows Sterling in the betting at 4.94/1. After a slow start to the tournament, the England captain has scored four goals in three knockout round matches and received ‘Star of the Match’ awards in the quarter and semi finals.

He is one short of Patrik Schick and Cristiano Ronaldo in the race for the Golden Boot so a brace for Kane in Sunday’s final would probably see him finish as top scorer. Kane can be backed at 5.69/2 for in that market.

You can get 6.25/1 on England/Harry Kane in the top goalscorer doubles market.

England go into Sunday’s final as marginal favourites. They are 2.789/5 to win inside 90 minutes while Italy are 3.185/40 to get the job done in normal time.

Italy’s Jorginho comes next in the player of the tournament betting at 9.617/2. The Chelsea midfielder has been instrumental in their victories and scored the winning penalty in the shootout against Spain in the semi-final. 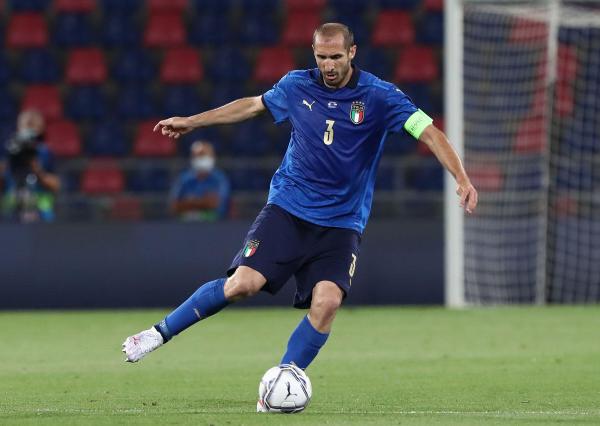 A match-winning performance from the Chelsea man could yet see him reward backers.

Chiellini has won plaudits for the way he has lead Italy at Euro 2020 and has been backed from 42.041/1 into 11.521/2 since Italy qualified for the final. At 36-years-old, the Juventus defender has looked like a man on a mission to take the trophy back to Rome.

England have conceded just one goal so far and centre-back Harry Maguire is 15.5. But you have to go back to 1996 for the last time a defensive-minded player won player of the tournament at the Euros. That year, Germany’s Matthias Sammer was triumphant.

Federico Chiesa (13.5) has become more important to Italy as the Euros have gone on, scoring in the second round and the semi-final.

Five years ago the player of the tournament award was won by Antoine Griezmann who helped hosts France reach the final where they were beaten by Portugal.