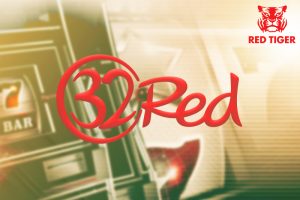 Online casino games maker Red Tiger has added another major client to its ever-growing list as it looks to grow its presence in multiple markets and gain access to a wider gaming audience.

The developer of games and related iGaming software has partnered with Kindred Group-owned casino brand 32Red to supply it with its entire catalog of HTML5 titles.

As part of its alliance with Red Tiger, 32Red has also joined the provider’s widely popular Daily Drop Jackpots network, which has enabled the iGaming operator to offer the game maker’s daily and hourly jackpots to its players.

32Red is one of the leading UK-facing casino and sports betting websites. In 2017, Kindred Group purchased the online gambling brand in a £175.6 million deal to add it to its multi-brand portfolio.

32Red has a massive customer base in the UK, which is one of Red Tiger’s core markets. The content maker and provider’s partnership with the operator will thus significantly strengthen its foothold in that important market.

Commenting on their alliance with 32Red, Red Tiger Commercial Director Chris Looney said that they are delighted to be teaming up with the brand and that they look forward to entertaining 32Red’s players with their existing titles and future games they have planned to release.

Mr. Looney added that their new partner is among “UK’s biggest names and its premium quality customer offering fits perfectly with our industry-leading portfolio.”

32Red General Manager UK Neil Banbury said that Red Tiger is a tier one provider with “a track-record of popularity among a wide variety of audiences” and that they have no doubt its games will be received well by their players.

Mr. Banbury went on to say that they are excited by the opportunities their partnership with Red Tiger offers and are looking forward to working alongside the content maker and its team in the coming months.

The partnership with 32Red is the latest in a series of deals announced by Red Tiger over the past few months. Earlier in August, the iGaming studio celebrated its Estonian market entry with a content supply deal with Betsson-owned brand Betsafe.