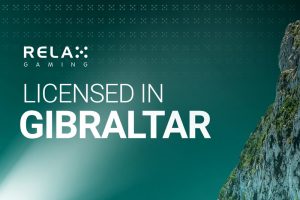 Online casino content supplier and aggregator Relax Gaming this week announced that it has added a new license to its existing ones as part of its strategy to strengthen its regulated presence.

The company said that it has been approved by the Gibraltar Licensing Authority in a move that will unlock further growth opportunities in key regulated markets.

The newly obtained Gibraltar license will enable the casino games provider to widen its reach and focus particular attention on the lucrative UK online gambling market where it has gone live with multiple operators in recent months and has several more major partnerships lined up to launch by the end of the year.

Relax boasts an ever-growing network of more than 100 operator partners and over 350 iGaming brands and provides them with access to more than 1,000 online casino titles through a single and seamless integration. Aside from proprietary content, the company also delivers a wide range of high-quality aggregated content from selected studios through its Silver Bullet program and from a number of provider partners through its Powered By program.

Relax was founded in 2010. The company started out building a bespoke online poker product for Kindred Group (formerly Unibet) and gradually evolved into a casino content delivery powerhouse.

Gibraltar License Allows Relax to Push Ahead at Full Speed

Commenting on their license from Gibraltar’s regulator, Relax CEO Tommi Maijala said that securing approval from the local Licensing Authority is a “key pillar” in their continued growth strategy and that they are delighted all their products and services have been fully certified by the regulatory body.

Mr. Maijala went on to say that this recently obtained license provides his company with new avenues to extend their reach and add “significant value to our third-party suppliers.”

The Relax CEO noted further that the license offers them the opportunity to “push ahead at full speed” in their core markets and progress content delivery deals with the industry’s biggest players. With the landmark partnership that Relax has in the pipeline, this new growth phase “promises to rapidly expand our market reach,” Mr. Maijala concluded.

Including the one from the Gibraltar Licensing Authority, Relax now holds four licenses for the provision of B2B services. The company is also licensed by the Malta Gaming Authority, the UK Gambling Commission, and the Romanian National Gambling Office.

News about its Gibraltar license come on the heels of Relax’s partnership with major online gambling brands Paddy Power and Betfair, both owned by Flutter Entertainment. Under the terms of this recent alliance, Relax has integrated a host of its third-party content and proprietary titles with the two brands. The deal significantly enhanced the provider’s UK presence.

Last month, Relax also teamed up with Kindred-owned brand 32Red in another deal that strengthened its foothold in the UK, a core focus market in the provider growth strategy.

Which footballer has the most appearances of all time?
1 hour ago