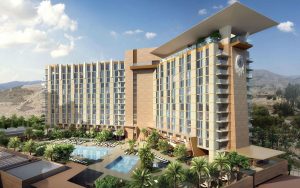 The San Manuel Band of Mission Indians last week celebrated an important milestone in the $550 million expansion of its San Manuel Casino resort in Highland, California.

Casino officials and staff members as well as tribal leaders and citizens attended on Friday a socially-distanced topping-off ceremony to place the final steel beam on top of the planned 17-story hotel tower that will be part of the existing casino complex.

Casino officials also said that the coronavirus pandemic and the delays in construction it has caused has forced them to push back the opening of the hotel and other planned new facilities to a later date.

The expansion project will be completed in three phases. During the topping-off ceremony, casino officials introduced an updated timeline for the completion of each of the three phases.

Phase One will include the debut of the casino’s expanded gaming floor plus a 24-hour restaurant and a high-end dining outlet as well as of three new retail shops. That phase will be completed in summer 2021.

Phase Two will include the opening of the casino’s first on-site hotel. The facility was previously scheduled to welcome its first guests in the summer of 2021, but will now swing its doors open in late 2021. It will feature 429 luxury rooms and suites and additional food and beverage facilities, a full-service spa and a pool deck with its own bar and private cabanas. The pool area will be located right above the casino floor.

Event Center to Open at a Later Date

The opening of a planned 2,700-seat event center has also been pushed back. The amenity that is intended to host various public events will now open at some point in 2022.

San Manuel Casino General Manager Peter Arceo said Friday that the coronavirus pandemic and the uncertainties it has created in the entertainment sector has forced them to move the timeline for the event center which would provide them with flexibility in figuring out the impact from the crisis.

Mr. Arceo revealed one new element that will be part of the new hotel tower. Its top floor would feature a VIP lounge that will provide views of the San Manuel Reservation and the surrounding area. The casino official teased that the “sunrises and sunsets from there are just going to be amazing.”

The original plan for the hotel tower’s top floor involved a restaurant, but Mr. Arceo said that a facility of this kind would have taken away from suite space and they eventually decided against it.

The resort’s expansion is expected to create more than 2,000 new permanent jobs that will be added to the property’s current headcount of 4,500.

San Manuel Casino first broke ground on its multi-million expansion in the summer of 2018. It has completed some aspects of the major project, including the addition of several high-limit gaming rooms, a larger gift shop, and a six-story parking with more than 2,000 spaces.

Gambling News
Is it True that Casino Games are Rigged?
2 hours ago
0 2