Races from three meetings on ITV on Saturday, but I will start at Ascot as all four of their terrestrial contests are handicaps, which are my meat and drink.

As always seems to be the case though, those damn changing prices on Friday afternoon were not particularly palatable.

I dodged a bullet when not putting up Tinto ante-post on Tuesday for the 6f handicap at 13:50 – it was a close-run thing but I couldn’t find out whether he was an intended runner, so I thankfully left him alone – and I was initially struggling a bit on the race in his absence, with so many in with a shout.

Dazzling Dan showed more at Newbury last time but I was expecting a slightly bigger price about him, though the opposite is probably true of the last-time-out runners-up Equitation and Chil Chil, which obviously made them of immediate interest.

The latter was initially put in at 8/1 by the Betfair Sportsbook on Thursday afternoon, and that was too big, as evidenced by the fact she was 6s two hours later.

Andrew Balding is not afraid of pitching lowly-rated fillies into Group/Listed company when the opportunity presents itself for some black type, so maybe he is keen to exploit what he thinks is a favourable handicap mark of 85 (though more likely a scenario is he just couldn’t find a suitable Listed contest for this Exceed And Excel half-sister to the stable’s five-time Group 2 winner Beat The Bank, two of those victories coming at Ascot).

Whatever the truth of that situation, there is no doubt that Chil Chil improved impressively through the ranks last season, storming home to beat an in-form horse on her final start at Newmarket last season, and she ran with a lot of credit on her reappearance over an extended 5f at Bath.

The trip would have been on the short side for her there – her three wins have been strong-staying performances over 6f – and I think the Bath form could prove very smart, too.

Firstly, the time was good, and the winner could be set to rise through the sprinting ranks. Furthermore, the fourth has come out and run a blinder when second to Treacherous in the Stewards’ Cup consolation race.

Off the same mark here, Chil Chil has to be a real factor. She is well-related (she is also a sister to the Commonwealth Cup fourth Salt Island, so her siblings obviously like Ascot) and less exposed than most in here after just eight starts.

I was going to leave her alone after missing the early 8/1, but she remains just about backable at 11/2 with the Betfair Sportsbook. It is not out of the realms of possibility that she could go off favourite. In fact, I think it is probable.

As I wrote in my ante-post piece on Tuesday, Shelir stood out at 10/1 for 1m handicap at 14:25 or rather he would have if he hadn’t had an alternative weekend entry.

Now he has been confirmed for this race, he hasn’t been missed by the layers – he is around half that 10/1, predictably enough as the handicap has cut up a fair bit, too – and he holds an obvious chance after a troubled passage over 7f here last time.

However, this race has more depth it than his current price suggests – the well-handicapped course winner Via Serendipity has to be a dangerous floater at a double-figure price for his new trainer, as well as more obvious contenders such as Jalaad – so I am happy to leave the race alone.

Australis looks a questionable, underpriced favourite to me at around 9/4 in the 2m handicap at 15:00, https://btfr.co/ 171895543, and the two I think you should concentrate on are Kaloor and Sleeping Lion.

Kaloor has improved as he has stepped up in trip this season (an opening run over 1m was rather optimistic) and he was doing all his best work late on when third over 1m6f at Sandown last time.

He was being rousted from some way out there and also had to be switched to the outside after getting a bump 2f out, but he came home very strongly, suggesting this extra 2m could well prove ideal.

He is another who was twice his current price earlier in the week, but he is definitely a big player here – the fourth from Sandown, Hochfeld, won at Goodwood last week – and worth an interest at [6.0] or bigger

Sleeping Lion is rock solid and he is also worth a punt at [7.0] or bigger. 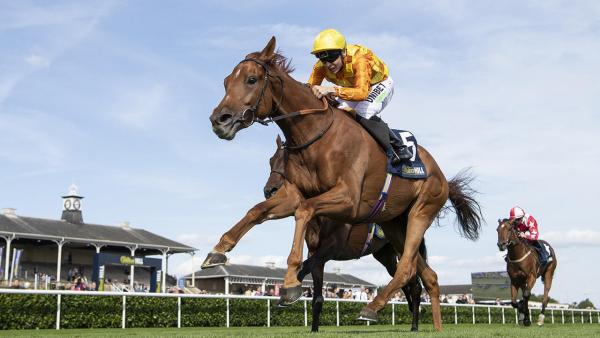 I am not sure what he was doing in front with 4f to run at Newcastle last time, as he is at his best when delivered late, so he ran a binder to finish second to course specialist Cosmelli in the circumstances.

The problem is the handicapper agreed and upped him 2lb to a career-high mark of 95, but there is scope for further progress in this fast-ground lover who has been placed in both of his course starts.

Expect him to be produced much later here, as hopefully Charlie D and Mondain will make it a good gallop.

I am going to back both Kaloor and Sleeping Lion, and I personally am going to do a reverse forecast on the pair, not something I usually do, if their prices hold up near the off. Feel free to join me if they do.

Caradoc close to being a bet

The market leaders, Look Closely and Omnivega, look solid, and I like the angle of Caradoc stepping back to 1m4f (his only start at the trip saw him finish a close third in the valuable Skybet handicap at York last season), while Hasanabad is a 40/1 outsider who could easily outrun his price after being given some assistance from the handicapper.

I prefer Caradoc most – he shaped really well over 1m2f at Epsom on his return and wasn’t ideally positioned on the inner at York last time, where he was possibly over-racing a bit too much throughout – but his price went west on Friday morning and odds of around 9/2 on the exchange are now no more than fair.

Haggas has a tasty pair

Connections of Veracious must have been delighted when Richard Hannon took out his Billesdon Brook and Cloak Of Spirits (as well as Anna Nerium) at the overnight stage at Haydock, as they were the Group 1 winner’s main form rivals in the 1m Listed race at 14:05.

She will take some stopping here if in the same form as when making all to beat One Master in the Falmouth Stakes last July – or, indeed, reproducing her two subsequent Group 1 efforts – but there are a couple of doubts.

The first is that this is a belated return, so she may have had an issue or two in the spring – and a wind op since her fourth in the QEII suggests as much, although she has been wearing a tongue-tie for a while now – and the other is that she has been beaten on her all seasonal bows, coming on a fair bit for each return effort.

Of course, she can afford to be 7lb or so below par and still edge home here, but she makes no appeal at her odds given the above concerns.

If she blows out (and a reproduction of her reappearance effort last season would not suffice here), then this is up for grabs for any of these.

The 1,000 Guineas fourth Final Song, who got a rough passage here last time, is the obvious one to take her on with, even if her trainer has suggested fast ground is not ideal for the filly, but William Haggas’ lightly-raced pair of 3yos interested me far more.

Tomorrow’s Dream may be 23lb shy of the favourite on official ratings of a mark of just 90 but she won really well at Goodwood and is a filly on the up, but the one I prefer of the Haggas duo is Wejdan.

Now, this filly has looked a bit of a handful in her two starts this season and carries a bit of a wealth warning.

She looked awkward when fifth over 7f here on her return, and she made Oisin Murphy‘s job very hard when sixth in a Listed race at Chantilly last month.

The in-running comment says “took slight keen hold” but I don’t know what horse they were watching as she was still pulling hard coming into the straight, and Murphy could never get her on an even keel to ride her out properly, either.

Remarkably, she still saw out her race well there – as she had done under a similarly, necessarily sympathetic ride here on her comeback – and maybe the only surprise here is that they try her in cheek pieces instead of a hood.

However, they could be the key to locking her untapped potential that she showed in abundance at two, when she shaped better than her fifth would suggest in the Lowther.

Haggas operates at just over a 20 per-cent strike rate when using this headgear for the first time (which is impressive enough, though predictably a shade lower than his overall win percentage), including a 5-length winner at Lingfield on Wednesday night, and I am happy to give her a spin at [26.0] or bigger.

I may look to back her without the favourite on Saturday morning too, when that market appears.

In fact, the more I look at the race the more I have to have Tomorrow’s Dream, the mount of Haydock maestro Richard Kingscote, onside at the price, too, even if the general 20/1 in the marketplace unfortunately soon disappeared.

She is a fast-improving filly who did it really well from a well-handicapped rival at Goodwood, and I think a mark of 90 for her is just scratching the surface after six starts.

Let’s hope so anyway, as the ratings – and her earlier Newbury second to Festive Star – underline what a job she has on.
Haggas has won three of the last six runnings of this race, and Tomorrow’s Dream has striking similarities to his 2014 scorer Taken Of Love.

Taken Of Love was also second in the same Newbury handicap Tomorrow’s Dream finished runner-up in and went on to win this race when just rated 90, too.

We lost over half of the field at the overnight stage in the Group 3 Rose Of Lancaster Stakes at 14:40 but, with the exception of Dark Vision, the big guns have stood their ground.

The absence of an eighth runner is a pain for those who like an each-way bet, and I found the race very difficult to solve.

Only the trip put me off form horse Zaaki at 4/1+ as all his best form has come at shorter – he was well below par when third in this race in 2018 – and he will need to be at his best to see off the likes of Global Giant (who looks plenty short enough at around the 11/10 mark on the exchange, mind you) in a Group 3 where very little covers five of the seven on official ratings.

Over at Newmarket, the Group 3 Sweet Solera at 15:20 is on the box and the 2/1 ante-post favourite Fly Miss Helen has made it to the final field.

The vibes for her were good before her Newbury debut last month, and she duly delivered, picking up very well to reel in the experienced Sarsparilla, who has gone to finish a fair third in a Goodwood maiden.

She really was powerful at the finish of that 6f contest, in a fair time, so you have to think the step up to 7f will be no issue on run-style, and nor is it on pedigree, either.

She is held in high regard and could prove very difficult to beat here, but her price of around 6/4 on the exchange tells you that and she does need to progress past the likes of Dubai Fountain and Setarhe and you never know what more Spirit Of Bermuda and Danilova have to offer.