Before you do lock your picks in, here’s a look at each of SportsBettingDime.com’s top betting experts are taking:

The upsets above are based on betting odds, not seeding. You can get a full look at each expert’s bracket below: 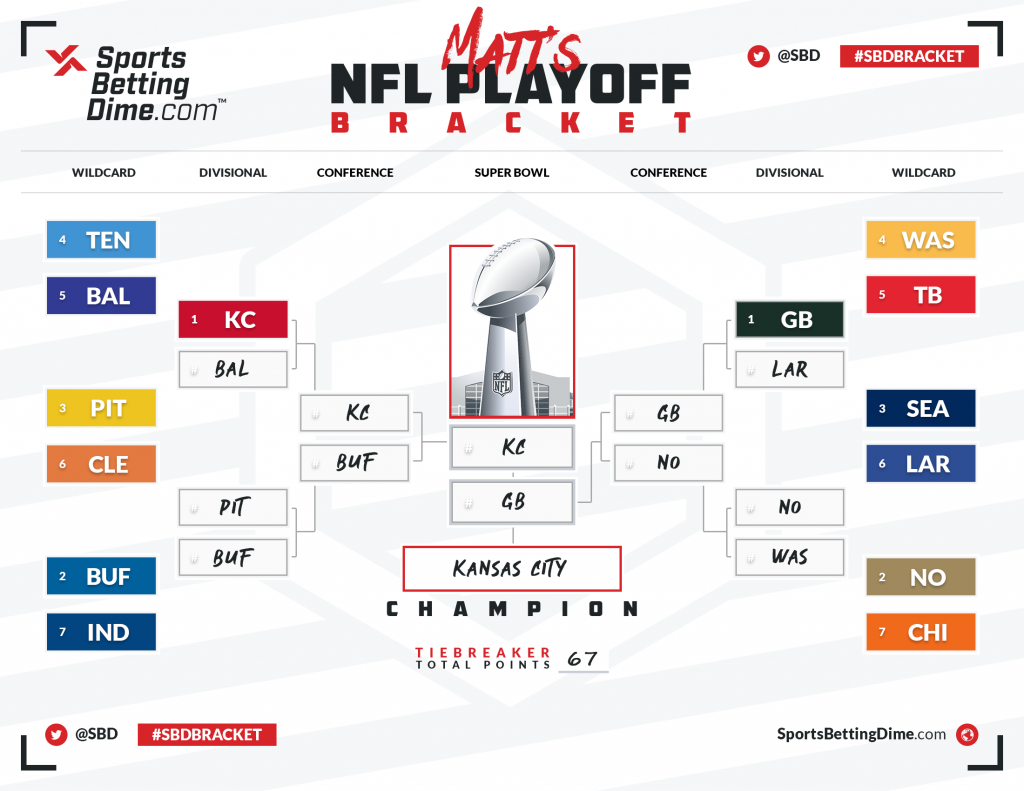 The way some pundits are talking about the Chiefs, you’d think they went 8-8 and barely squeaked into the playoffs. When a team is dominant for a long period of time, it becomes less and less impressive. This is what the public is suffering from right now.

Kansas City went 5-0 against teams with a winning record in 2020, including two-score wins over the Ravens and Bills, and all five of those games came on the road. This is a team who lost one game this season when their starters played.

Pittsburgh is the only team in the AFC with the defense to slow Patrick Mahomes, but I don’t like the odds of Ben Roethlisberger and the offense showing up. Kansas City should get to the Super Bowl with little resistance.

I see a lot more parity in the NFC, with five of the top six seeds possessing legitimate chances to get to the Super Bowl – Washington as the aside. Homefield advantage is the deciding factor for me, as Green Bay is 15-2 at home over the last two seasons – one playoff game included.

Despite the better price with the Packers, I still believe the Chiefs offer the best value on the board, and are my pick to win Super Bowl 55.

I foresee the AFC side of Wild Card Weekend playing out pretty chalky with all betting favorites winning – Baltimore being a road favorite. The one I’m least confident in is the Ravens over Titans pick. Tennessee doesn’t have Dean Pees, the architect of their brilliant defensive scheme against Lamar Jackson in last year’s playoffs, and their defense has been very weak this season.

On the NFC side, I’ve got two upsets happening: Washington over Tampa Bay and LA over Seattle. The Football Team should not be viewed as a 7-9 team. They’ve been very competitive over the last half the season, not having lost a game by more than eight points since October 11, and are 5-1 when Alex Smith starts under center.

Khalil Mack and Robert Quinn led a Bears defense that pressured Tom Brady on 43.2% of his dropbacks, his highest rate in a game since 2017.

The Bucs have also struggled in primetime games this season, going just 1-3 in games where kickoff is later than 8pm ET. Their lone win came by two points over the Giants and have a loss to the Bears in there as well. On top of that, Tampa Bay is just 1-3 this year when Tom Brady is sacked three or more times. Washington has recorded three-plus sacks in nine of 16 games this season, including five of their last seven.

The Rams aren’t exactly hot coming in, losing two of their last three. But I’m putting my confidence in their defense rising to the occasion. 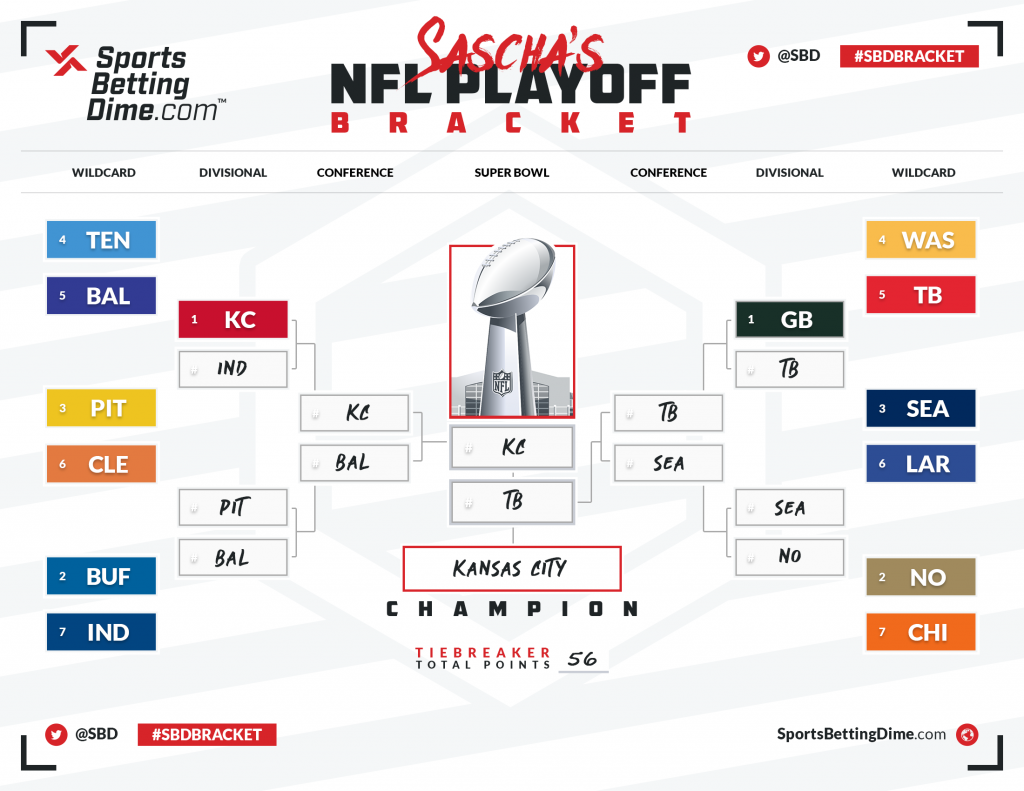 It’s a short number on KC, which is never appealing in a balanced league, but I love their chances of winning the conference, which isn’t something I can say about any team in the NFC. Earning the top seed and getting the first-round bye was huge.

The only game this team’s starters lost all season was a 40-32 setback against the Raiders, which turned on an uncharacteristic late-game turnover from Patrick Mahomes. They went 4-0 against fellow playoff teams, (BAL, BUF, TB, NO) and every single one of those games was on the road.

They weren’t even particularly “lucky”, ranking in the bottom five in fumble recoveries. They did win eight one-score games, but they led four of those by at least nine points in the fourth quarter. Their 7-9 ATS record belies how dominant they were over the past 17 weeks. 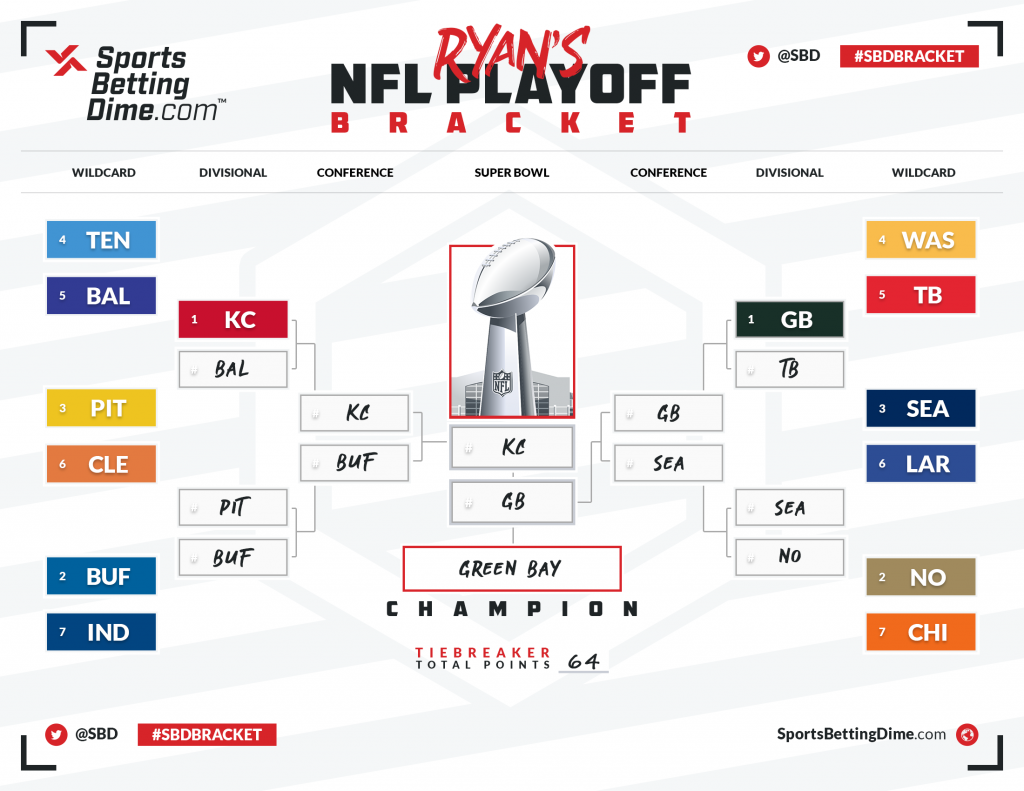 I went super chalky here but both Kansas City and Green Bay look to be in too good of form to ignore. The defending champs hadn’t lost since Week 5 until they rested their starters in Week 17. They’ll likely be favored all throughout the playoffs. KC has also already defeated both Baltimore and Buffalo this season, two teams I have them projected to meet on their way to the Super Bowl.

Then in the NFC, Aaron Rodgers and Green Bay have also won six straight and Rodgers looks primed to win league MVP. Looking at potential playoff opponents, they’ve defeated the Saints this season, as well as the Bears twice. They were throttled 38-10 by the Bucs, their likely Divisional Round opponent, which does pose some concern. That game was in Tampa though, whereas this one will be at Lambeau where I’ll give the Pack the edge.

Whether it’s Seattle or New Orleans from there (in my projections), I still like Green Bay. Drew Brees is starting to look his age and who knows if his ribs will still be intact by the Conference Championships. Seattle has had a great season too and their defense has improved, but they just edged past the 49ers in Week 17 and struggled vs NFC East opponents recently.

Honestly, if it’s KC vs Green Bay it could go either way. They both rank comparably in several offensive and defensive categories. We know all about the offense for both teams, but on defense, both average 4.5 yards per carry against the rush and 7.1 yards per attempt against the pass.

But, there has been something just slightly off with the Chiefs. Maybe it’s that they are so good that they haven’t given 100% during the regular season. Or maybe they are just a notch below their normal selves. If so, I could see a potential upset versus either the Ravens or Bills.

Rodgers has only reached the Super Bowl once, a travesty given his stellar career. If he makes it there for the second time, he likely knows it may be his last chance at a second title. I’ll back him and the Pack at the better odds of +480 to win their first Super Bowl since 2011. 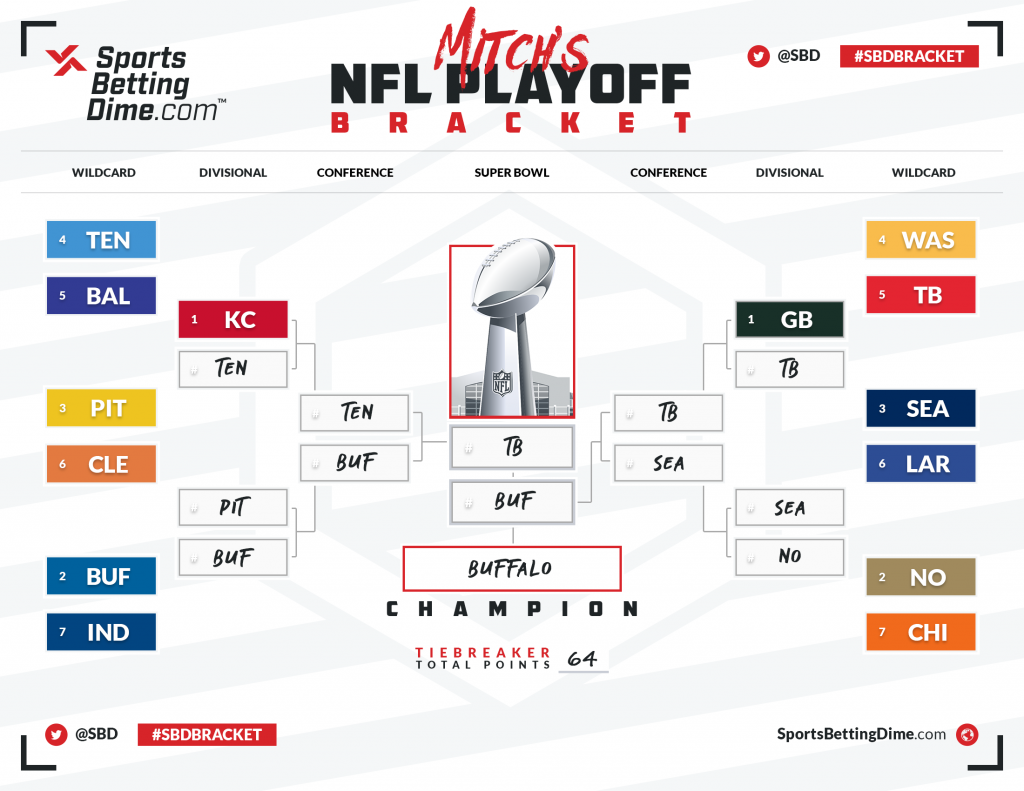 In what has been the best season for Buffalo in over 20 years, it only seems fitting this team will win the Super Bowl while less than 10,000 of the Bills mafia got to see them in person all year.

After their mid-October malaise, the Bills have won nine in a row (and could’ve been ten if not for the Hail Murray in Arizona), as Josh Allen looked like a future MVP winner, throwing for over 4,500 yards and accounting for 46 total touchdowns. Stefon Diggs has terrorized secondaries all season, and the rest of the receiving corps is arguably the deepest in the league. The offense is also first in the league at converting both 3rd and 4th downs – a crucial indicator of playoff success.

The return of Matt Milano at LB has stabilized the defense that was beat up early in the season, and they are top five in takeaways per game – averaging 1.6 per contest. With an offense as explosive as they have, Leslie Frazier’s unit is strong enough to hang in against the big time offenses they’ll have to take down in the AFC playoffs.

I have Buffalo taking out Tampa Bay in Super Bowl 55, and Bills fans can finally get the last laugh on Tom Brady to cap off their magical 2020 season.

Last season, the Ravens were seemingly a juggernaut, until the Titans rolled into Baltimore and rode Derrick Henry to a stunning upset win in the Divisional round.

This season, Baltimore is far from a juggernaut (and just a three-point favorite on the road) but Tennessee will do the exact same.

Although we’ve seen this year’s Titans defense gashed against some good teams due to their majority of man coverage, that should work against the Ravens low-volume passing attack as you can load up the box to handle Lamar Jackson and JK Dobbins.

Derrick Henry ran for 133 yards when these two teams played in November – including a monstrous rumble for the winning TD in overtime – and we should expect more of the same at Nissan Stadium this weekend. With the largest crowd of all the Wild Card games expected in Nashville, Tennessee will knock off Baltimore once again. 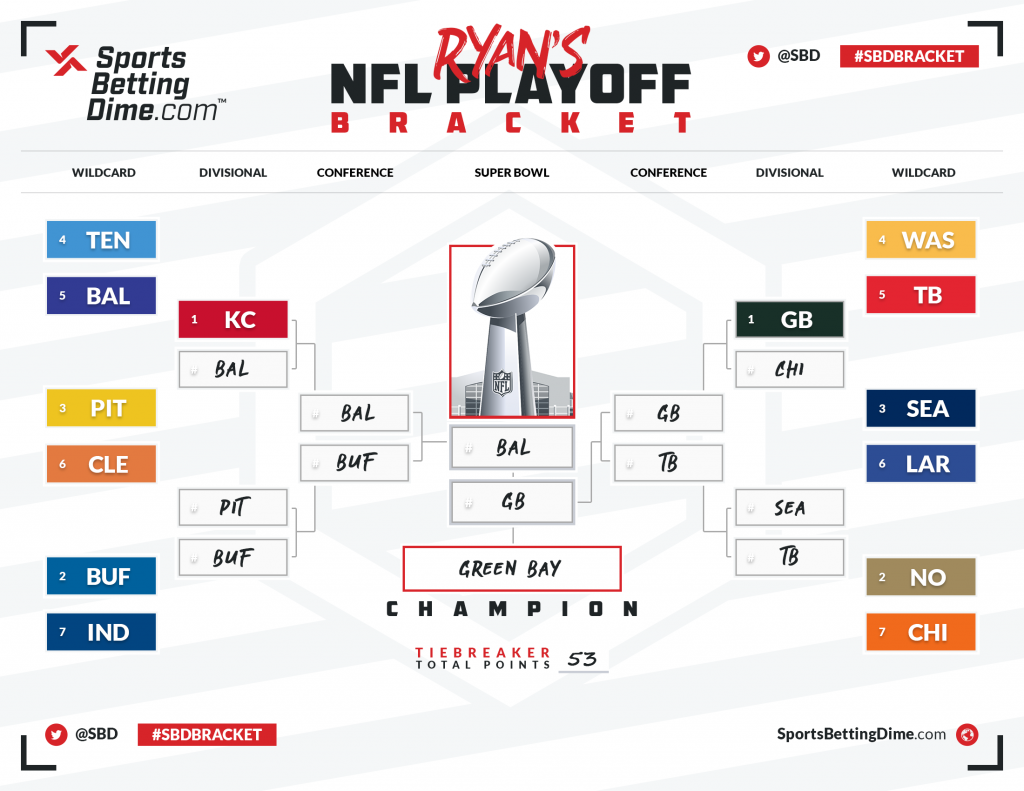 Aaron Rodgers and the Green Bay Packers have been on a mission this year. The Packers head into the postseason on a high of six straight wins and one of the most potent offenses in the league.

The tandem of Rodgers and Davante Adams has been unstoppable through the air, while Aaron Jones rushed for over 1,000 yards and is averaging 5.5 yards per carry. With this offensive attack, a very underrated defense, and home-field advantage throughout the postseason, the Packers have put themselves in a great spot to make a charge for Super Bowl 55.

The New Orleans Saints can’t seem to get out of their own way in the playoffs. Drew Brees and Sean Payton have faced some heartbreaking defeats over the last few seasons. Over their last four playoff appearances, the Saints have lost to the Rams, Seahawks, and Vikings twice.

The Chicago Bears come into this matchup in a perfect upset spot. In December, Trubisky threw for 1,001 yards, seven touchdowns, and two interceptions. Not to mention, he boasted a completion percentage of 72.3% and led the Bears to a 3-1 record.

There is great value at +385 with the Saints’ recent history in the playoffs. 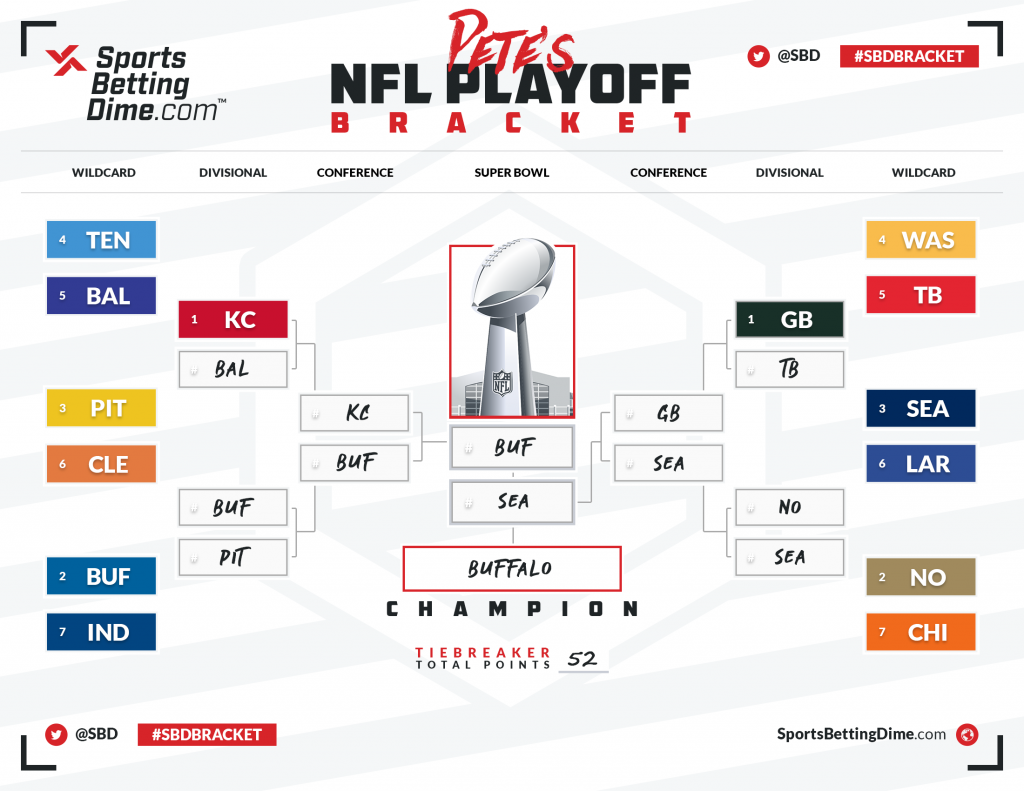 I see the AFC winner prevailing as Super Bowl champion, with Buffalo being my bet to win the Lombardi Trophy. The Bills posses a ton of momentum & confidence headed into the playoffs, and I think they can go all the way to a title.

We’ve watched Josh Allen’s game transform before us, and now I see a team around him peaking at the right time, with a ton of talent, a great coach, and relatively healthy lineup. Kansas City just hasn’t put teams away this season like we’ve seen them do in the past few years, and I think the Bills can hang with the champs for 12 rounds.

The NFC has some strong teams, but not a ton of depth, and I see the Bills being able to matchup well against all four of the NFC’s best. The Buffalo defense has improved drastically week-by-week heading down the stretch, and I think that’s put them over the hump in my eyes. Hoping they can battle for a win over the Chiefs, I like the Bills and Josh Allen to take the championship back to western New York.