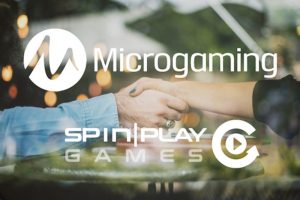 Microgaming’s roster of independent studios developing games exclusively for the provider has been joined by another casino games maker.

SpinPlay Games was founded by a team of mathematicians boasting decades of industry experience. The studio focuses on balancing sophisticated mathematical models with design process and aesthetic personality to craft engaging and exciting gameplay experiences for fans of online casino games.

SpinPlay Games is the latest of a host of independent iGaming studios to secure exclusive supply deals with Microgaming and create content for the major provider.

SpinPlay Games will celebrate its alliance with Microgaming with the release of its debut title Roman Power. The game sports a classic 5×3 grid layout and 20 paylines. It invites players to explore an ancient empire of riches. The game’s fiery grid and epic soundtrack make player experience truly vivid.

Roman Power is set to be added to Microgaming’s content aggregation platform on June 18. The game is loaded with special features such as fiery multipliers and an expanding Hero Wild.

It is one of many gaming titles planned to be premiered by Microgaming over the course of the year. The provider’s family of independent game development studios and content partners are able to access over 800 online gambling operators in more than 20 regulated markets.

Commenting on their partnership with SpinPlay Games, Microgaming Chief Operating Officer Andrew Clucas said that the studio employs a mathematics-based approach in a bid to deliver “uniquely creative and playable games.”

Of the upcoming Roman Power, Mr. Clucas said that Roman Power is set to form the vanguard of a “feature-rich line-up of upcoming new content.”

Anton Kuhlmann, CEO at SpinPlay Games, commented that they consider it a real honor to be able to collaborate with Microgaming and that they are “extremely proud” to join the provider’s lineup of world-class content development partners.

Of his company, Mr. Kuhlmann said that it focuses on “holistic design where our themes, sounds, and animations come together with our fine-tuned math models to deliver fun and rewarding gameplay experiences.”

The SpinPlay Games boss further noted that their debut game, Roman Power, is a high-volatility title that has a theme and math models that target more experienced slots players. Mr. Kuhlman went on to say that the soon-to-be-released game offers huge win potential on every spin thanks to a combination of stacked symbols, the expanding wild feature, and multipliers.

SpinPlay Games’ second game to be released as part of its partnership with Microgaming will be titled Almighty Aztec and is set to join the provider’s aggregation platform in the near future.