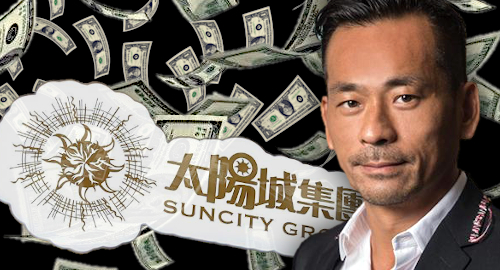 On Tuesday, Suncity Group Holdings informed the Hong Kong Stock Exchange that it expects to book a net loss of around RMB108m (US$15.6m) when it delivers its financial report card for the six months ending June 30. However, the company was keen to stress that this was a far more preferable situation than the RMB1.25b it lost in the first half of 2019. So cheer up.

Suncity Group Holdings is the publicly traded sister of the Suncity Group junket, both of which are controlled by Alvin Chau. The public company began life as a ‘travel and hospitality’ business that primarily served to funnel high-rolling gamblers to VIP gaming rooms run by the junket arm in casinos across the Asia-Pacific region.

Suncity Group Holdings said it recorded “a substantial decrease in revenue from travel-related products and services” in H1 as casinos across Asia either shut down completely or saw their traffic slow to a trickle. The latter group includes Macau, which until recently was largely off-limits for most mainland Chinese residents.

To ensure investor confidence, Chau announced Tuesday that he had agreed to provide the company with “a stable source of funding” out of his own pocket. Chau announced that he would exchange existing shareholder loans worth HK$3.88b (US$501m) into perpetual securities, which the company may opt to repay or not repay (either principal or interest) after 10 years.

Furthermore, Chau has agreed to provide additional funds up to a maximum HK$6b (US$774.2m), also in exchange for perpetual securities. Chau stated that Suncity “requires a lot of funds to expand” and he was “happy to dip into my own pockets” to ensure that expansion continues.

The past few years have indeed seen Suncity Group Holdings expand from its travel-focused origins. The company took majority control of Russia’s Tigre de Cristal in June, is developing a casino in the Philippines, its Hoiana casino in Vietnam recently held an operational preview for select guests and plans are on track to manage a casino project in Cambodia’s Sihanoukville region.

Suncity Group Holdings has managed to accomplish these feats despite China accusing the junket division last summer of targeting mainland residents with online gambling offers. Suncity Group denied the reports but within days announced that it would no longer conduct any gaming operations not approved by regulators in Macau.

In May of this year, Suncity’s online gambling site 138.com abruptly closed its doors without explanation. Around the same time, the junket informed its ‘investors’ that they would be spared the losses the private company had incurred due to the land-based casino closures.

This week, Reuters reported that Suncity Group had suffered a run on the bank by around 900 VIP customers, who reportedly descended on Suncity-run VIP rooms in Macau between July 9-11 to withdraw funds held in their gambling accounts. The panic was reportedly sparked by China’s ongoing efforts to disrupt ‘cross-border’ gambling funds and prompted Chau to release an online video assuring customers that their funds were safe.

Third delay for iGaming in the Netherlands
16 mins ago

Grand Korea Leisure to extend closures into February
1 hour ago