A relatively quiet Saturday for Gordon Elliott who will saddle just the six runners at Fairyhouse, and here the Betfair Ambassador gives his exclusive views on their chances of victory…

“He looks like he has progressed from that last run which would suggest that he has a future at graded level and I’d like to think he will be closely involved.”

Has progressed and should be closely involved

I was very pleased with his first start for us when he won a conditions event at this track last month. He possibly had fortune on his side as a horse of Willie’s (Youmdor) came down at the last when holding a slender lead. In fairness though our horse had managed to get Youmdor off the bridle and the way he went to the line suggested that it would have been close enough if both horses had cleared the last without incident. He looks like he has progressed from that last run which would suggest that he has a future at graded level and I’d like to think he will be closely involved.

Drop in grade and should run a solid race

You couldn’t fault everybody for doing their bit to stage this race which will hopefully take place at the third time of asking on Saturday afternoon. All the way along Petit Mouchoir has long been our only hope and he should run well. On ratings and at the weights he is reasonably treated by the race conditions and this race does represent quite a drop in class following two runs in Grade 1s at Leopardstown. The first of those saw him finish an excellent third to Sharjah and while he was well beaten behind Honeysuckle next time I wasn’t that disappointed as he probably paid the price for trying to match strides with an exceptional winner. Had we ridden him differently he could have run a good deal better I suspect. I’m hoping he will run his usual solid race.

He is a grand horse who has run three solid races in defeat this season. I thought he showed ability on his first two bumper runs and he again ran respectably in a very similar race to this at Thurles last month when he was second to a wide margin winner. He’ll have to take a step forward to win this but I could still see him running well and we are claiming off him which should help his cause.

Campeador hasn’t progressed into the horse we hoped he would earlier in his career when a couple of last flight falls cost him victory at Cheltenham and in a big handicap at this track. There are more races to be won with him though as he showed when he was third in quite a decent handicap hurdle at Navan over this two-and-a-half-mile trip last month. A repeat of that last run should see him involved and we claiming off him which will be a help too.

Elwood has lost his way. After a number of falls over fences he lost his confidence so we put him back over hurdles but he didn’t show much in a handicap here last month. He isn’t a bad horse on his day and he does like soft ground so hopefully he will take a step in the right direction but he is best watched for the moment. 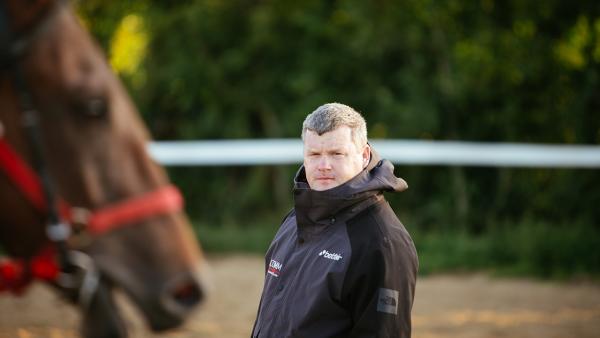 Improved since last run but this looks a smart bumper

We’ve had him since he was a store and I was delighted to see him win a point-to-point for us first time out in November. I was hoping he’d win a Down Royal bumper on his debut a couple of months ago and he did everything right but just bumped into a smart horse of Stuart Crawford’s in Dixie Flyer. He looks to me as though he has improved for that first run and I’m expecting another good run from him although this has the appearance of quite a smart bumper.