The English links Renaissance can continue

The crop of English golfers that emerged about ten years ago were (and have been) very good, but put them by the seaside and they’ve taken “very good” up a few notches.

The latter, a little like elder English statesman Lee Westwood, has never played great links golf on home soil, but take him to Ireland or Scotland and he’s wonderful.

Across the Irish Sea, he was tied fourth at Royal County Down in the 2014 Irish Open and tied sixth at Royal Portrush in the 2019 Open.

North of Hadrian’s Wall, he was a quarter-finalist in the 2015 Paul Lawrie Match Play at Murcar Links, tied fifth at Royal Troon in the 2016 Open, is a two-time winner (and one-time runner-up) in the Dunhill Links Championship, and in this event he’s had a wonderful time.

He was tied fourth on debut at Royal Aberdeen, second at Castle Stuart, has been tied ninth and T22nd at Gullane, and was T14th at The Renaissance Club two years ago, carding 66-64-67 after an opening effort of 70 had him T93rd on the leaderboard.

His links record is not just full of quality, but also quantity.

It’s even notable that his best result since winning the Abu Dhabi HSBC Championship at the start of the year was tied second in the Palmetto Championship early last month – on a links-like course that allowed him to see and play the shots he loves executing.

Back in 2016, when winning his first Dunhill title, he said: “I don’t know exactly what it is about links golf that works for me, but hopefully we can play links golf every week next year. That would be great.”

There’s clearly a very fine field assembled this week, but Hatton is worthy of being counted among them these days.

He’s won four Rolex Series events on the European Tour, is a PGA Tour winner, has competed in majors and at the World Golf Championship, plus is ranked top 10 in the world.

This is as short as this column will go in the quest for each way value, but with eight places it’s a choice I’m more than content to make.

It’s pretty much established now that Southend’s Matthew Southgate plays his best golf on the linksland and also that he loves the Open.

It’s kind of a happy union: fast-running, traditional set-ups fire and fuel his imagination, prompting good thinking and his best shots; meanwhile, his family has a long-running tradition of attending Open week, indeed as a boy, in 1999, Southgate sat on a bridge overlooking the Barry Burn watching Jean Van de Velde paddle around and the very next day got to play the 18th himself (challenged to make a six that would have won the Open, he did so).

A Carnoustie member with family links to the Lothian coast, he was a winner of the St Andrews Links Trophy as an amateur, was second at halfway in this event at Castle Stuart in 2013, T12th at Royal Troon in the 2016 Open, tied second at Portstewart in the 2017 Irish Open, tied sixth two weeks later in the Open at Royal Birkdale, second at the 2019 Alfred Dunhill Links and tied ninth here at The Renaissance Club last October.

He also has a fine record in Open Qualifying at Royal Cinque Ports (a near neighbour of next week’s Open host) and carded a 65 to win a minor tour event at Royal St George’s in 2014.

In other words, he’s very well-suited for this week’s test and he’s also got plenty of reasons and motivation to perform well enough to grab a late ticket to Sandwich (there are three spot up for grabs). 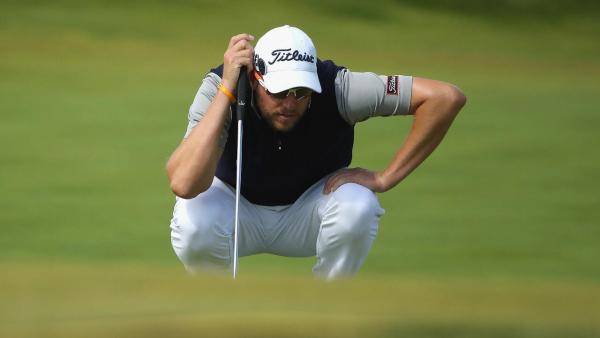 He’s got a top 10 on the course, two top 10s against the world’s elite (when faced with this sort of test), and he’s grabbed a ticket to the Open via qualifying before so understands what lies ahead.

And three starts ago he very nearly won the European Open in Germany.

As with the next pick, the huge price demands the smaller stake, but he’s got a fine case.

I’ve never been afraid of backing a links specialist apparently out of form.

I don’t want to sounds like one of those hokey American books about fathers and sons having a life-changing jaunt around the Scottish coast, but those who like the seaside clattering of sticks on balls unquestionably have their golfing spirits lifted by reacquainting themselves with the dunes and the smell of salt in the air.

It is also a form of the game that calls for shot visualisation, rather than the normal week in-week out notion of completing a perfect swing.

So when the likes of Southgate and Eddie Pepperell like it, they tend to like it a lot and it’s even possible to argue that a good result might arrive not as a consequence of bad form, but certainly in spite of it.

In Ireland, he’s experienced play-off defeat at Royal County Down and fourth at Lahinch.

In England, he was tied second at Hillside (and also first at Walton Heath – not links but as links as anything other than links will ever be).

In Scotland, he’s been tied seventh and T15th at the Dunhill Links; tied sixth at Carnoustie in the Open; and in the Scottish Open, second and tied fourth at Gullane, tied ninth here last October, and T12th at Castle Stuart.

Superb stuff all round.

Admittedly, since leading the British Masters after 54-holes in May, he’s not played great and missed the cut last week, but the links magic can turn that form around very quickly.