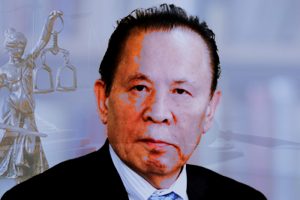 Japanese casino tycoon Kazuo Okada has hit another snag in a messy family row over his voting rights in a company founded by him that is now controlled by his son Tomohiro Okada.

A recent ruling by the Tokyo District Court rejected a petition filed by Mr. Okada’s daughter, Hiromi, to have her voting rights in Okada Holdings Limited (OHL) returned.

The ruling could effectively prevent the Japanese billionaire businessman from returning to OHL’s board, a company he founded and chaired, for the next 30 years, Inside Asian Gaming reports.

The recently issued ruling related to a 30-year Trust Agreement between Mr. Okada’s children – Tomohiro and Hiromi – signed back in May 2017. Under the terms of that agreement, Ms. Okada granted her brother voting rights on her stake in OHL. She owned a 9.78% stake in the company at the time as well as in its subsidiary Universal Entertainment Corp.

His sister’s rights, combined with his own 43.48% stake in the company, provided Tomohiro with the majority he needed to oust his father from the board and assume control of OHL and some of its subsidiaries in the summer of 2017.

As reported back then by Casino News Daily, Mr. Okada was removed from the company’s board over accusations that he was negligent to his duty as a board member on at least two occasions. Those involved alleged improper money transfers that aimed to benefit the businessman.

As mentioned above, Mr. Okada’s children signed the disputed Trust Agreement in May 2017, which was shortly before the billionaire was removed from OHL’s board.

Ms. Okada reconciled with her father at a later point and the pair initiated legal proceedings in Hong Kong against Tomohiro and Universal Entertainment Corp. Mr. Okada’s daughter argued in the legal challenge that she had been tricked into signing the Trust Agreement by her brother.

Mr. Okada’s estranged son countersued his sister and father in Tokyo, seeking to have the disputed agreement validated. The court ruled that the agreement was indeed valid in a decision issued in February 2019.

Mr. Okada and his daughter appealed the ruling and the appeal has now been rejected by the Tokyo District Court, which said that the agreement cannot be canceled by the defendants.

It should also be noted that the Tokyo High Court had previously rejected another appeal filed by Ms. Okada and her father, which effectively makes the ruling final and binding.

According to a written statement provided by Okada Manila on behalf of its parent organization Universal Entertainment Corp., the Trust Agreement will remain in effect for the next 30 years, “with Tomohiro Okada given control of OHL.”

The statement further read that this “effectively prevents former Chairman Kazuo Okada from returning to the boards of both OHL and UEC, as well as its subsidiary, Okada Manila, within this period.”

Universal Entertainment Corp. is a Japanese gaming machine manufacturer founded by Mr. Okada in the late 1960s. The company later on expanded into more segments of the gambling industry, including the operation of integrated resorts. It owns and runs the Okada Manila hotel and casino resort in the Philippine capital through local subsidiaries.

Gambling News
How to Find and Calculate Value Bets?
34 mins ago
0 1

How to Find and Calculate Value Bets?
34 mins ago