Small-field novices’ chases and Cross Country handicap chases where all bar three of the runners are at least 9lb out of the handicap – fancy an account-closer anyone? – are just not for me, so I am going to be taking in all the races at Cheltenham on Friday, terrestrial or not.

Quite a few positives for Pipe runner

The presence of Magic Saint should delight those who believe he has been poorly campaigned over 2m4f on three of his last four starts – and to be fair to them he did win the other over the minimum trip at Newbury last December – especially as he was dropped 2lb for his Old Roan reappearance, with a capable 5lb claimer now up.

His price of around 3/1 on the exchange should not particularly please them though, as I think he could be bumping into some better-treated animals here and top of that list is Eamon An Cnoic.

Difficult to pronounce, tricky to spell and hard to fancy if you believe his recent profile.

The only shaft of light in a pretty sorry tale going back to April 2019 is a second here in December, and his six outings either side of that paint a picture of an inconsistent horse and one not averse to ejecting his rider.

But my cynical ears pricked up when he was left out of a David Pipe stable tour in the Racing Post this week, and I just hope the trainer did that to hide his enthusiasm.

He never gives anything away though, in common with most on these tours, to be fair.

I find the Pipe yard very hard to read – Jonjo’s is another – and as a result I don’t tend to back too many from these stables, as I just find their MO hard to read.

But both are going very well this season, and Pipe in particular has been flying of late (well not especially in the last few days), building up nicely for this Cheltenham meeting that the stable has always tried to target down the years.

The horses in the late David Johnson’s blue and green silks – the Robert Sangster of the jumps – doing the business for Martin are still fresh in the mind.

So hopefully Eamon An Cnoic has been primed for this, and the signs are encouraging.

Most obviously, two of his best recent efforts have been at this course. He is back on the same mark as that aforementioned second last December, where Ballywood was back in third, and 2lb lower than when fourth in the Plate at the Festival in 2019.

And the fact that he has had another wind op since we last saw him unseat at Kempton in March could be another significant pointer, too.

He had a breathing op before bolting up over 2m at Chepstow last year, beating Capeland (who went on to be rated 10lb higher) in a very quick time, and hopefully that can do the trick one again here.

He obviously gets further than 2m, so the fact that four of these have gone forward in recent starts, is encouraging on that score, as is that rain.

I just hope his jumping stands up early doors (both of those exists have come at the second), and Tom Scudamore can get him into a rhythm.

There are obviously doubts, not least some dangerous opposition, but the 7mm of rain overnight on Wednesday was a positive for him (and there are some showers forecast for Friday, too) and he is a win-only bet at 12.011/1 or bigger.

I will leave the four-runner novices’ chase at 14:25 to others – I know they are good horses but this is a sport funded by betting, so I would be very much inclined to give the conditionals a day in the sun and broadcast the opening 18-runner handicap hurdle on ITV instead – and I can’t see Tiger Roll giving 4lb to Easysland or 20lb to Welsh National winner Potters Corner, who will be popular each-way no doubt, despite his lack of experience over these fences (though he schooled over them, however well or badly I don’t know, a fortnight ago), in the Cross Country at 15:00.

Mind you, there could be even better place prospects from out of the handicap – if in doubt look to France and Vino Royale, who has racing experience over these fences, perhaps? – but these events are not my area of expertise. 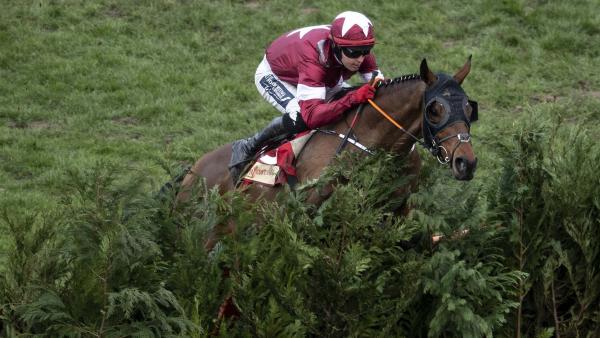 I do like a novices’ hurdle though, but preferably one with eight of more runners, and unfortunately only seven have rocked up for the Grade 2 over 2m5f at 15:35.

From the outset, I was very tempted to put Polish up at 12/1+ as he would surely (well, possibly) have won had he not clattered the fourth-last and the penultimate hurdle here last time, and I suspect at least a couple of points have been added on to his price because he lacks the sexy profile of the market-leaders Does He Know and Grand Mogul, as well as the very smart Flat stayer The Grand Visir.

That is never a bad thing.

On the downside, I am not sure how strong the form of that 3m race was though, and he has yet to do anything on the clock, so I was very torn.

However, in the final analysis I said to myself I wouldn’t want to lay him at 10/1 myself, so I have to back him at 13.012/1 or bigger, albeit to small stakes. I think the step back in trip will suit him.

Palace and Dancer my two against the field in the opener

I hope Fergal O’Brien has a very good day as I am backing and tipping his horse in the opener, and maybe the finale, too. I haven’t decided yet.

In fact, I am backing two in the first, Fergal’s Lungarno Palace and Magic Dancer, even if Pipe’s short-priced favourite Induno, with Fergus Gillard taking 6lb off for good measure – the stable has won this handicap four times since 2011, and Induno’s Ffos Las and Sedgefield wins last season read very well given his handicap mark of just 115 – and the 1lb well-in Playa Blanca are respected.

The case for Lungarno Palace revolves around forgiving him for a modest run here last time but his jockey never seemed happy with him from flag-fall there, and this is a horse who usually travels so well into his races when on a going day. And he also hung and looked a difficult ride in the straight last time.

In the circumstances, he did pretty well to finish as close as he did, and if the re-applied blinkers (he won with them on the Flat) straighten him out then he is handicapped to go close off 122 on a course on which he has recorded three of his best hurdling efforts, including at this meeting in 2018.

The same comments pretty much apply to Magic Dancer, especially as I thought his run was pretty underwhelming when he was very well-backed here last month – he was never really going either – though I suspect that was a much stronger race than this and he was dropped 2lb for it.

He is a course specialist (won on this card in 2017) who likes decent ground and has slipped to an attractive mark, so he gets the recommendation. He does have 2m5f form in the past, and this step up in trip may be needed again now against younger and pacier models.

Both of their jockeys came claim 3lb by dint of riding for their stables, and that is basically a 3lb gift given how experienced and capable they are.

I am very worried about potential handicap snip/blot Induno, and you can see why his opening price of 9/2 quickly collapsed, but I have to side against him at his current odds.

Hoping O’Brien can end the day with some fine Art

O’Brien won the concluding novices’ handicap hurdle last season and he has the early favourite for the race in The Bees Knees, 8lb well-in here, but I like his other one, Art Approval, far better at the prices.

He has shaped like a handicap project in both his starts over hurdles.

He doesn’t have the solid form and time claims of One True King, who I like most from those at the top of the market, but what he has is potential and plenty of it.

He looked a bit awkward over 2m4f first time out at Market Rasen and was again novicey here last month – a race in which he was nearly brought down two out as well – but I liked the way he responded when he was given a wave of the whip after the last to finish off his race well against the 4/11 winner, who ran well when fourth off 128 in a decent handicap at Sandown on Sunday.

An opening mark of 118 for Art Approval is no gimme but it doesn’t appear overly-punitive after the Sandown race, and of course this half-brother to Willie Mullins’ decent 2m hurdles winner Authorized Art is, technically, the one with the most scope for improvement here after just the minimum brace required for him to be running in handicap hurdles, and only three Flat starts.