If you could construct an ITV offering less suited to my punting strengths than Saturday’s seven terrestrial races then I would be very surprised!

But I am paid to write, not moan, so let’s crack on and see if we can curl out a punt or two.

Favourite hard to oppose in Lockinge

Let’s start at Newbury and the Group 1 action of the Lockinge at 15:35 a race predictably dominated by Palace Pier in the betting and probably in the contest itself.

There were the usual “he is only 80%” comments before his return at Sandown – reminiscent of the Enable chats of the past – which I would tend to treat with a little suspicion given he looked pretty awesome on the day, albeit in a weak race in which his main market rival Khuzaam (though he drifted like a barge beforehand) blew out on turf.

Basically, if Palace Pier runs to the level of form of his Jacques le Marois defeat of Alpine Star, then he wins this by upwards of 2 lengths, on ground that may well be soft come race-time and pretty much perfect for him.

On the ground, it is currently good to soft (soft in places) with perhaps another 7mm or so to come before the start of racing.

So while we have several borderline Group 1 horses ranged against him – chief among them my old mucker, Lope Y Fernandez, who would like better ground than this – I am not inclined to bet against him, as he is a fair 4/6 poke if you like to bet like that.

I am not tempted to find an each-way alternative either, given there is no stand-out in the second-tier. That said, top of that list would probably be Century Dream and I may see what price he is in the without favourite markets when they appear and firm up on Saturday morning.

The Newbury ITV card starts with the seven-runner 6f Listed race at 13:50 and the Sportsbook initially took the view that Creative Force was the one to beat, making him an 11/8 chance and Tactical a 2/1 poke.

I’d have Tactical heading the betting, and I reckon he will go off favourite myself (not a controversial view, admittedly).

With little confirmed pace in the line-up, it could well be that Creative Force makes the running – as he did on his debut – but Tactical is surely the one to beat in here. He did well to beat the subsequent Guineas fourth Naval Crown in the 7f Free Handicap on his return and showed plenty of 5f and 6f pace in a Group 2-winning juvenile campaign.

However, at around 2/1, I can let him go unbacked, especially as he may find the ground a bit too testing for his liking.

I suspect that Al Aasy will continue on his steep upward improvement path by beating Logician and co in the 1m4f Group 3 at 14:25 even under his 3lb penalty, but odds of around even money are a fair reflection of his chances of doing so and nothing more.

Bridge can lead us the way to a winner

The London Gold Cup at 15:00 is traditionally one of the hottest 3yo handicaps of the year, with a recent roll call of several future Group 1 winners, most recently Defoe in 2017, and the two more recent scorers obliged in Group 2 company, as well.

This year’s renewal looks a bit lighter than usual, in terms of numbers and the class-depth, but we still have seven last-time-out winners from top yards, so it will take plenty of winning.

There isn’t any habitual front-runner in here but maybe King Frankel and Dejame Paso will go forward, and make it an honest gallop.

Bay Bridge would be clear favourite in my book as he impressed in a wide-margin win at Newcastle on his return, and the 7 ¼-length third came out and won a handicap by the thick-end of 3 lengths off a mark of 75 at Beverley on Tuesday.

Granted the other three beaten horses in that five-runner race have been beaten since, but two were not disgraced in defeat, and it is hard to escape the conclusion Bay Bridge could be very well handicapped off 90 here.

He doesn’t boast a lofty pedigree but, being by New Bay, he is bred to be suited by the expected soft ground (on which he ran okay on his debut at Yarmouth), so I think he is a very fair 9/2 chance with the Sportsbook.

Back him win-only there.

The stable won this with Cannock Chase off a mark of 89 in 2014, and he was yet another winner to taste success at the top level afterwards. This one has an entry in the Group 2 King Edward VII Stakes at Royal Ascot.

Legend is my bet of the day

On a day of limited opportunities I am going in two-handed here, though.

Until it was pointed out to me last weekend, I hadn’t clocked what a good season Hugo Palmer was having. He is not having a huge amount of winners but he has had 13 winners at a strike rate of 20% going into Friday’s racing and he could have a well-treated one in Oz Legend.

His Newcastle win in December has worked out really well and probably entitles him to a mark well in excess of 82 – the second was just touched in a good maiden on his return, the third is due to run in the 3.20pm at Newmarket on Friday, the fourth and fifth are now rated 85 and 83 respectively, while the sixth is actually on 96 – while I was very encouraged by his reappearance third at Windsor on his turf debut, in what I am inclined to believe was another very good novice.

The expected stronger pace here is expected to suit this Australia colt and his pedigree gives you every encouragement soft ground (it was good to firm at Windsor) will be to his liking as well. The dam handled deep ground and his 114-rated brother Patrick Sarsfield probably put up his best performance when second in a Prix Dollar on heavy ground.

In fact, Oz Legend is my number one fancy at the prices and the bet of the day.

Jumby arguably the best bet at Newmarket but I can pass

Initially, I was a touch surprised to see one firm price up Fancy Man at 11/4 for the 1m2f Listed race at 14:05 at Newmarket as everyone saw how inefficiently he was ridden when third in the Chester Vase, when trading at 1.152/13 when sweeping into the lead and faltering thereafter.

The step down to 1m2f is an obvious plus but he meets some promising sorts in here under a 4lb penalty, so I can leave well alone.

Against him, I’d fear Tasman Bay most, whose Newbury third last time out is obviously working out very well, over the impeccably-bred favourite John Leeper (by Frankel out of Snow Fairy) at the prices. The latter looks very short at around 6/4.

I loved Bellosa when she sluiced up on his debut here in a good time on her debut – and she was not winning unawares there after being very well backed from the night before – but the market likes her even more here as she steps up in class for the 7f Listed race at 14:40.

If she dots up again at a short price in a better race – around 7/4 – as I think she may well do, then good luck to her. I won’t have had a bet on the race. 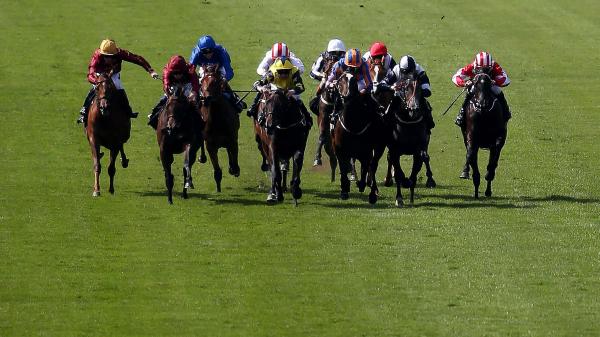 To be perfectly honest, I suspect the favourite in here, Jumby, is going to take the world of beating after an unlucky third here to Creative Force on his reappearance – the yard was going through a quiet patch at the time as well – and he has to have a leading chance off the same mark here.

The winner followed up next time and runs in the Listed race at Newbury on Saturday, while the second ran into a monster when second at Hamilton last time. The fourth hasn’t run since but the fifth won a Group 3 on his following start.

His chances scream out at you.

But 10/3 with the Betfair Sportsbook in a 17-runner sprint handicap? Tough one.

To be honest with you, I actually think it is a fair enough price but the most important aspect of responsible gambling and successful punting is walking away when you are not entirely satisfied with the price.

There is never a shortage of betting opportunities around the next corner, so always resist the temptation of getting involved for the sake of it.

No, I am happy to stick with the two bets in the one race at Newbury and have a quiet punting Saturday.