Trade deadline buy low and sell high and how to stream

The trade deadline in many leagues will be approaching so time is running out to get those teams sorted.

I will go into why I do not believe in trade deadlines another time as that could take up the entire word count, but for now I will look at some players to really target while you can.

Mike Davis‘ value looked to have disappeared entirely with the return of Christian McCaffrey, but in his first game back the number one overall pick in most drafts went down with injury meaning Davis jumps back up into RB1 consideration. You may be able to pick him up for pretty cheap and he can make the difference over the next month.

In PPR leagues you may be able to get an absolute bargain in JD Mckissic. Alex Smith looks set to be the Washington quarterback for the foreseeable future and he dumps the ball off to running backs as much as anybody. McKissick is the pass catching option in Washington and could see many of those touches. He has six or more catches in half of his games this season already, and with Smith in at quarterback he saw a staggering 14 targets on Sunday. Many will see Gibson as the lead back there, but McKissic could be the fantasy star.

And finally a wide receiver and we are going for DJ Chark. With Jake Luton at quarterback his value is certainly up in the air, but he is starting to show that he is quarterback proof. The Jaguars are often behind, meaning they need to throw the ball more and they have an incredible run of games coming up. They play three of the bottom five pass defences in the next four weeks and the other is against the Steelers that give up plenty of points to opposing receivers. Many will be down on his value right now, but he can carry your team all the way.

If you are trading you also have to let some players go and one that may never have a higher value is Zack Moss. He has three touchdowns in the past two weeks but going forward his outlook is not great. Not only does he share touches with Devin Singletary and Josh Allen, he has a brutal run coming up, particularly for the fantasy playoffs.

In a very similar spot is Curtis Samuel. He has had a few excellent games and coming into the season was a hot pick for many people but there are more signs that he will tail off again over the rest of this season than carry on this form. He has so much competition for touches and Teddy Bridgewater, another player that you can certainly sell high on, is unlikely to keep up this hot streak. 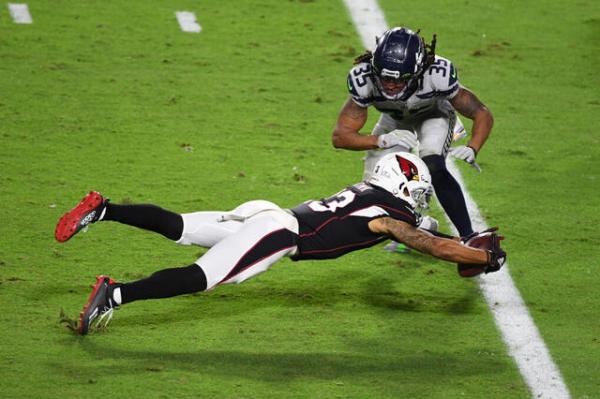 Streaming is something that often gets talked about in fantasy but a lot of people don’t really know what it is, or the best way to go about it.

Basically it just means picking up a player or defence each week based on the match up, rather than just picking up one or drafting them and sticking with them all the way through.

In most cases with defence and quarterback this is the best way to go. Firstly you don’t have to invest high draft picks into these positions that are so matchup dependant. That means you can concentrate on the tougher positions such as running back or wide receiver. Secondly it can often mean that overall you score more points.

The Steelers defence was the first taken in most drafts. So far they have just three weeks with double digit points. Just playing whichever team has faced the Jets this season would have given you an average of 9.8. Of course, they may not always be available but there is a good chance that one of the teams facing them, the Giants, the Cowboys or Washington likely will be.

And with quarterbacks the Seahawks are giving up 27.9 points per game to opposing quarterbacks. Just blindly taking whoever was playing them would give you the equivalent of the third overall quarterback.

So when it comes to drafts next season, wait on defences and quarterbacks and focus on those running backs and wide receivers that really make a difference.

Nevada vs Nebraska Odds, Lines and Spread
38 mins ago