The U.S. and China have been locked in a battle over international trade and security policies that have caused a lot of turmoil for the global commercial industry. China’s renewed hardline stance on Hong Kong didn’t help matters, and the friction between the two countries has only increased. However, despite the ongoing issues between the two governments and their “see who blinks first” stance, the question of whether or not the saga will impact U.S. casino operators in China-controlled Macau has been answered. Analysts with the Sanford Bernstein brokerage who have their finger on the pulse of the gaming industry in Asia tell industry players to breathe a sigh of relief. 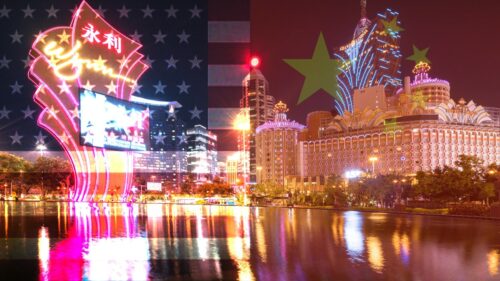 One of the concerns that has been raised centers on the upcoming requirement by casino operators in Macau to receive new license concessions. There are six licenses active in the city, and all are going to expire in 2022. While the logical assumption is that gaming operators will simply be awarded new licenses, this isn’t a guarantee, nor is it a legal obligation. Macau’s gaming laws assert that a new tender process must be held; however, the chances of an existing operator having its license pulled are slim.

The U.S.-China rift could potentially change that, though, if China wanted to exert more control over Macau and hit the U.S. below the belt. The country could try to force its will on the city, like it has in Hong Kong, and demand changes to Macau’s gaming laws, which are set to be amended sometime next year. The good news for gaming operators and the industry, though, is that Bernstein analysts Vitaly Umansky, Tianjiao Yu and Kelsey Zhu don’t expect this to happen.

They explained, “We view the scenario where one or more of the U.S. casino operators lose their gaming concession to be remote, unless the [U.S.-China] relationship sours significantly further and we see directed action against U.S. businesses in China, which would raise risk levels in Macau as well.” The analysts also asserted, to the pleasure of casino operators, that it’s likely that “all six concessionaires will have new concessions and there will be no new entrants.”

However, the changes to Macau’s gaming program probably won’t all be good news, at least for operators. The analysts add, “The key considerations under such a scenario would revolve around what economic impact the new concession regime would have. There are many levers at the government’s disposal – e.g., altering the gross gaming revenue (GGR) tax, imposing taxation on gaming profits, imposing taxation on dividends, mandating upfront fees.”

Macau’s commercial and economic landscapes are changing, and were prior to the appearance of COVID-19. The global coronavirus pandemic has only served to further drive home the belief that the city needs to not rely so heavily on gaming options to attract tourism, and there will be a renewed push to expand this sector. To facilitate the growth and the diversification, casino operators will most likely be expected to step up and take a more active role as community stewards, and the timing of the concession approvals will be used to ensure Macau’s development.

Chemical Energy can provide a winning Friday finale
8 mins ago