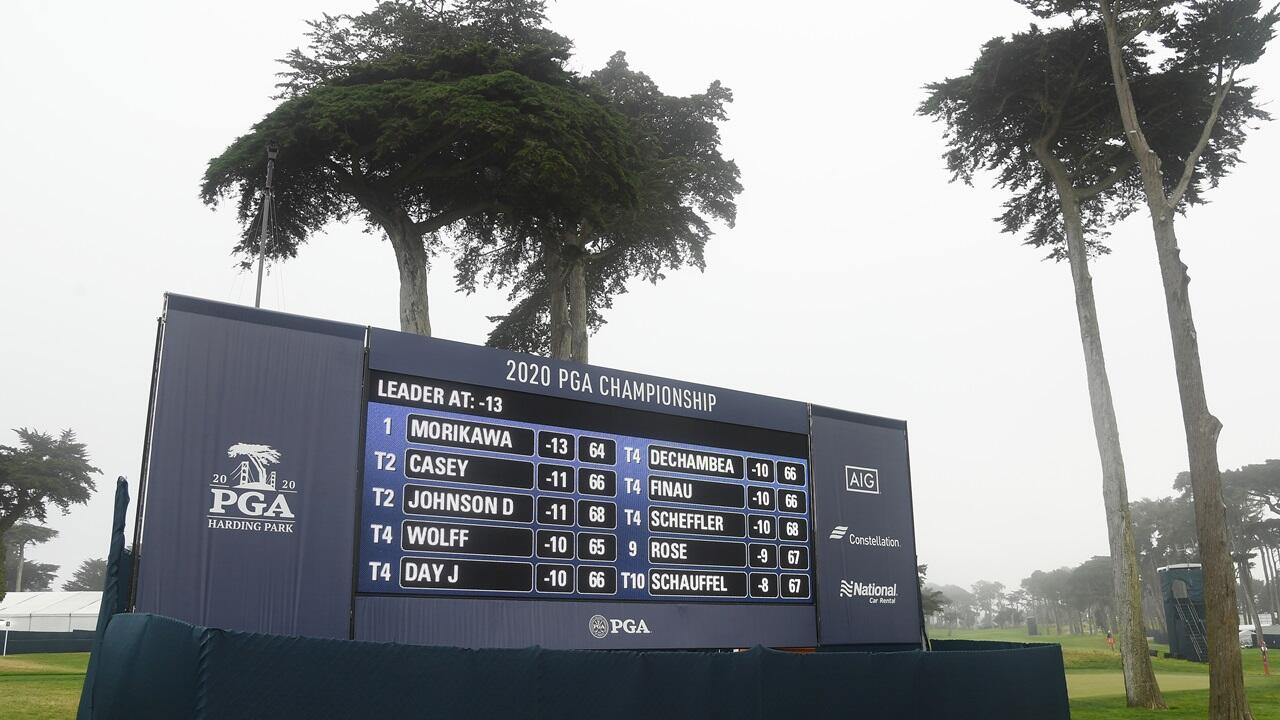 As many as six players were tied for the lead as the final two-ball of Dustin Johnson and Scottie Scheffler made their way to the 12th tee in the fourth and final round of the 102nd edition of the US PGA Championship. Midnight had come and gone in the UK and impressive youngster, Matthew Wolff, who was matched at a low of [7.4], had posted his ten-under-par total, which never quite felt like it would be enough, but a three-hole playoff, and an even later night than anticipated, had looked a distinct possibility.

The defending champion, Brooks Koepka, who was also looking to become the first player in history to win the championship three years in-a-row since it became a stroke-play event in 1958, was the first to fold.

Having been matched at a low of [4.1], the pre-event [13.5] chance, never looked comfortable on Sunday and having limped to a four-over-par, birdie-free, 39 on the front nine, he soon disappeared from our screens before finishing tied for 29th, having began the final round just two back.

The 54-hole leader, Dustin Johnson, a pre-tournament [25.0] chance, birdied the opening hole and was matched at a low of [2.92] but he never threatened to pull away – eventually finishing tied second thanks to a birdie at the last. My pre-event [300.0] pick, Cameron Champ, was matched at a low of [5.5] when he gave himself a seven footer for birdie at the seventh to take the sole lead on -11, having birdied both four and six, but the putt slipped by and minutes later he was stymied behind a tree off the ninth tee. Unfortunately, that bad break led to a double-bogey six to effectively end his chance.

Tony Finau – who placed for Mike Norman in the each-way column – dipped in and out of serious contention and was matched at a low of [5.9], Bryson DeChambeau, who had started nicely to be matched at just [4.2], rallied after the turn, having made back-to-back bogeys at eight and nine, and having been on the premises throughout the final round, Paul Casey, a pre-event [180.0] chance, matched at a high of [320.0], was also matched at a low of [4.2]. Casey did nothing wrong and eventually finished tied for second alongside DJ.

Jason Day looked the most likely to post a decent clubhouse target when he birdied 10, 11 and 14 to get to 10-under-par but he failed to pick up another stroke after that, having been matched at a low of [4.5], and Dave Tindall’s 125/1 fancy, Scottie Scheffler, was matched at just [5.3] after he’d birdied the 10th to get to -10, but he too could go no lower and in the end, another Dave’s pre-event picks, Collin Morikawa, powered his way to victory, with thanks largely to this sublime tee-shot on the par four 16th.

Morikawa’s weekend rounds of 65-64 produced the best closing 36-hole score ever by a major champion in the men’s game and his third PGA Tour victory in just his 28th start as a pro sees him rise to number five in the Official World rankings.

Morikawa’s driving accuracy was a significant factor this week, as was his excellent putting. Something that is so often his only slight weakness. He saved par from 22 feet on the first, birdied the third from 16 feet and kept everything rolling with arguably his most significant putt of the week on six when he holed out from 26 feet for par. Holing three putts like that in your first six holes is going to give anyone belief that they can go on to win.

I’d also backed Paul Casey ante-post at Christmas so it was relatively easy to trade my way to a nice profit but I can’t help but rue what might have been again.

Last week I went into the final round of the FedEx St Jude with pre-tournament [200.0] pick, Brendon Todd, leading through three rounds so to see Champ hit the front at [300.0] and not trade below [5.0] was slightly irritating. Had he popped in the birdie putt at seven I’d have an even better week but I’m certainly not complaining and I can’t help but recall what life was like before the Exchange.

In the bad old days, I’d have backed both Todd and Champ at far smaller prices with poor place terms and no chance of making a profit. They may not have won – in fact they finished tied 10th and tied 15th – but it’s been a very profitable fortnight thanks to the lay backs and it just goes to show that they really don’t need to win for you to have a good week trading golf.

At only 23, Morikawa is the ninth US PGA Championship winner in 11 years to be aged in his 20s.

Having won the Workday Charity Open last month, he becomes the 18th winner in 21 editions to have previously won an event earlier in the season.

He’s the 33rd major winner in-a-row to be ranked inside the top-50 in the Official World Rankings (was ranked 12th) and the fact that he hadn’t previously won a major was also a pointer.

Following Morikawa’s success, 13 of the last 18 (72%) major championships have gone to a first-timer and 22 of the last 35 US PGA Champions (63%) have gone the way of someone breaking their major duck.

Following his win, Morikawa is now a [26.0] chance to win next month’s US Open at Winged Foot but we have plenty of action to enjoy before then – starting this week with the Celtic Classic on the European tour and Wyndham Championship on the PGA tour. I’ll be back later today or early tomorrow with my previews.