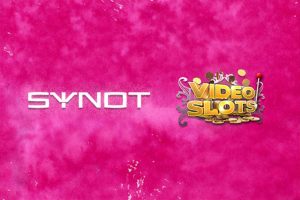 Under the terms of a recent content supply deal between the two companies, Videoslots has added new SYNOT releases such as Respin Joker 91, Pixel Reels, and DiamondZ to its already burgeoning games lobby.

The agreement also covers several classics and best-performing slots from the Bratislava-based game development studio, including Joker 40 and Book of Secrets, which Videoslots is set to incorporate into its library in the coming weeks and months.

Licensed by the Malta Gaming Authority and the UK Gambling Commission and certified in a number of European territories, SYNOT Games has seen the popularity of its products explode in recent years, which resulted in the company’s rapid growth in multiple regulated online gambling markets.

The studio boasts a suite of more than 70 exciting games that are available in 28 different languages and can be played in over 150 online casinos operating in Spain, Italy, the UK, Sweden, Portugal, Latvia, Lithuania, Denmark, Croatia, the Czech Republic, and more.

Commenting on integrating SYNOT’s content, Videoslots Head of Commercials William Ahlberg said that they are pleased to be adding the studio’s titles to their “stable of great slots” and that these newly added games have “a following all over the world and are popular with a wide range of demographics.”

The official went on to note that Videoslots’ players know that they “will always have more choice with us than at any other casino” and that it is great to be adding yet “more high-quality content like this.”

Videoslots’ games lobby is one of the largest in the industry with thousands of titles from leading content makers and suppliers.

Of their partnership with Videoslots, SYNOT Games CCO Martina Hrabinska said that they are very excited about teaming up with an “industry giant like Videoslots” and that this collaboration will allow them to extend their reach in a number of core markets, “whilst providing real entertainment to Videoslots’ players.”

A few months ago, the game developer also announced a delivery agreement with Betshop.GR to strengthen its footing in Greece’s recently reorganized online gambling market.

Free MLB Picks and Odds Today Including Yankees vs Rays, Dodgers vs Giants
1 hour ago