Will Trump’s defeat be bad news for Boris?

With nine days to go until the US election the latest odds on the Exchange make Joe Biden a 68% chance to win. This weekend the president has drifted to 2/13.05 to win re-election while Biden is into 40/851.48.

A single bet of £500,000 was placed on Biden on Friday – the largest wager of this record-breaking election – so there’s plenty of confidence out there that the challenger can win the White House on 3 November.

Based on these indications, it seems like a good time to ask: what would Donald Trump’s defeat, and Biden’s victory, mean for Boris Johnson’s government and Anglo-American relations generally over the next few years?

I said in the summer that a Biden victory could be bad news for Johnson. That’s now the UK media consensus and there are reports this weekend that, having originally backed Trump, the Westminster government are scrambling to build bridges with the Democrats across the pond.

But high on Biden’s list of foreign policy priorities if he wins – and let’s remember that Trump stunned bettors and pollsters four years ago by achieving an unlikely victory – will be repairing US-EU relations and banishing memories of Trump’s disastrous America First agenda.

Brexit and the Trump presidency have been synonymous since Britain voted to leave the EU and Americans elected Trump in the same year (2016). Months after the UK’s in-out referendum, Nigel Farage campaigned for Trump and was introduced at rallies as “Mr Brexit”.

Four years on, a decisive Biden victory over Trump – as the odds indicate is likely – could signal the end of the age of populism, or at the very least stem its tide. This could be damaging for Johnson who long ago hitched his premiership to the wagon of Trump-style populism.

Biden, who has Irish roots, previously criticised Brexit and said he will not give Britain any kind of deal if it threatens the Good Friday agreement.

We can’t allow the Good Friday Agreement that brought peace to Northern Ireland to become a casualty of Brexit.

Any trade deal between the U.S. and U.K. must be contingent upon respect for the Agreement and preventing the return of a hard border. Period. https://t.co/Ecu9jPrcHL

But let’s not get carried away. What’s said on the campaign trail often stays there. It’s true that, after he was elected, Bill Clinton never forgave John Major for supporting Clinton’s opponent George H.W. Bush in the 1992 US election. Major’s successor Tony Blair shared with Clinton one of the best US president-UK prime minister bonds – right up there with Ronald Regan and Margaret Thatcher in the 1980s.

It’s in the interests of both countries, however, to smooth over any personal differences and work together as close allies. 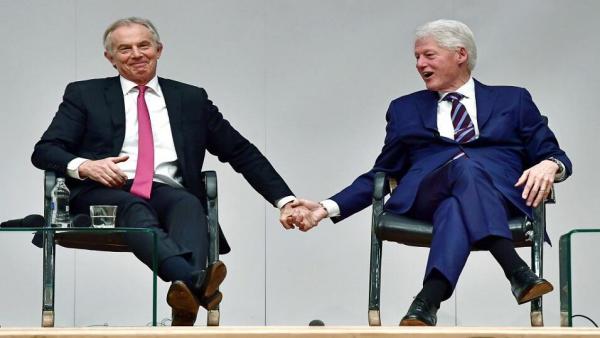 Johnson, as Mayor of London, criticised Trump and called him “out of his mind” after Trump made erroneous claims about the English capital in 2015. A year later, during the build-up to the US election of 2016, Sajid Javid said the British government looked forward to working with Barack Obama’s successor whoever “she” turned out to be.

None of this did UK-US relations any harm. Trump is a petty individual, and those who know him say he bares titanic grudges, but in Johnson’s case Trump forgot what had been said in the past and the pair worked together as kindred political spirits. Johnson respects power and can, when he wants to, endear himself to those who wield it – regardless of their politics.

Even if Trump is defeated there will still be plenty of populists in power around the world. Narendra Modi in India, for example, Recep Tayyip Erdogan in Turkey and the governments of Poland and Hungary have all won re-election, so it would be hasty to assume that the end of Trump spells the permanent demise of right-wing populism.

There’s also the increasing possibility that Johnson won’t get much chance to work with Biden. The prime minister is under fire again this weekend over the government’s refusal to extend free school meals at the same time as he’s being criticised for his handling of the coronavirus pandemic – one thing he and Trump certainly share in common.

As for the US election, which takes place a week on Tuesday, follow the latest betting news as it unfolds on our live blog and get a daily bet.